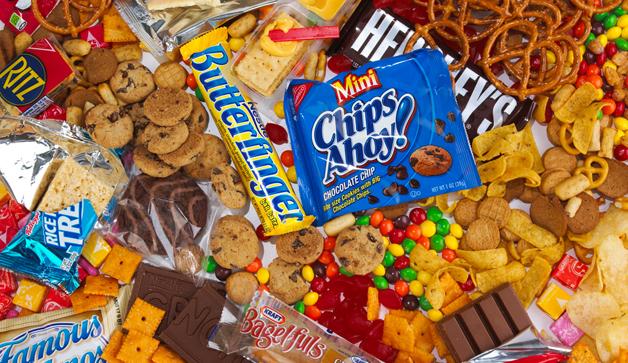 Tis the season for the flu shot propaganda machine to rev into high gear, as Big Pharma, the CDC, and the mainstream media urge people to roll up their sleeves and have toxins like mercury and formaldehyde injected into them, all in the name of “staying healthy this winter.”

There’s a much easier way to stay healthy that also involves toxins – the ones in our food supply. Only I recommend avoiding them instead of injecting them directly into your body.

If you consume processed foods on a regular basis, you’re forcing your immune system to work to protect you against the things you are ingesting, instead of fighting off viruses and germs.

Many people thoughtlessly poison themselves every single day. They have some white sugar and fluoride in the morning coffee. They have some MSG-laden, highly salted saturated fat at lunch and wash it down with a neurotoxic, artificially sweetened drink. Dinner gets picked up at a convenient drive-thru window, and it’s enriched with more MSG and some GMO high fructose corn syrup. Don’t even get me started on that late night snack in front of the TV. Most of what typical Americans eat can hardly even be considered actual food.

This isn’t just some far-fetched conspiracy theory.  A recent study published in the Nutrition Journal focused on the effects of a junk food diet on the human immune system. Dr. Ian Miles, a physician at the National Institute of Allergy and Infectious Diseases, concluded that ingredients such as refined sugars, salt, saturated fat, artificial sweeteners, gluten, and genetically modified foods, all negatively impacted the human body, and led to to increased inflammation, reduced control of infection, increased rates of cancer, and increased risk for allergic and auto-inflammatory disease. On top of that, beneficial cut bacteria is disturbed, leading to a more vulnerable immune system.

The bottom line is, when you’re poisoning your system instead of nourishing it, you are working at cross-purposes with your body.

Here are the things to avoid if you want to stay healthy:

These are the highly processed “bad fats”.  Anything that says “hydrogenated” or “partially hydrogenated” is a fat that has been processed to add hydrogen. This keeps the fat hard at room temperature and works as a cheap, less perishable substitute for butter in processed foods. The increased rigidity in these fat molecules causes them to get “stuck” in your arteries, and can lead to heart disease, cancer, and decreased immune function. The World’s Healthiest Foods, a not-for-profit website, explains further:

Unsaturated fats have various wavy or zigzag forms (called “cis-” forms) that contribute to more flexible arteries and other body structures. Hydrogenated fats also have bent molecular shapes, but hydrogenated fats are bent in the mirror-opposite direction (which is why they are called “trans-” forms) of naturally occurring unsaturated fats. For this reason, hydrogenated fats are difficult for the body to “grab onto” and metabolize, and can neither be incorporated into cell structures nor excreted in the normal fashion. Thus, hydrogenated or “trans-” fats tend to remain “stuck” in blood circulation, becoming oxidized and most importantly, contributing significantly to an increased risk for cardiovascular disease and possibly also cancer.

The bottom line is: refined sugar inhibits phagocytosis. This process that you may never have heard of is your immune system’s secret weapon. Encyclopedia Brittanica defines phagocytosis:

Living cells called phagocytes ingest or engulf other cells or particles. The phagocyte may be a free-living one-celled organism, such as an amoeba, or one of the body cells, such as a leukocyte (white blood cell). In some forms of animal life, such as amoebas and sponges, phagocytosis is a means of feeding; in higher animals phagocytosis is chiefly a defensive reaction against infection and invasion of the body by foreign substances (antigens).

Eating or drinking 100 grams (8 tbsp.) of sugar, the equivalent of two- and-a-half 12-ounce cans of soda, can reduce the ability of white blood cells to kill germs by 40 percent. The immune-suppressing effect of sugar starts less than thirty minutes after ingestion and may last for five hours. In contrast, the ingestion of complex carbohydrates, or starches, has no effect on the immune system.

You can still indulge your sweet tooth with healthier options like honey, maple syrup, or minimally processed organic sugar (but never, never artificial sweetener – see the next entry!)

The FDA doesn’t seem to agree, but artificial sweeteners are incredibly toxic. Currently approved are saccharine, aspartame, sucralose, neotame, and acesulfame K. Despite their approval by the FDA, these highly processed additives are regarded with great suspicion.  Studies show direct correlations to cancer, neurological issues, digestive problems and negative impact on gut flora. One artificial in particular, sucralose, causes the thymus gland to shrink, which can directly impact the immune system, according to Modern Alternative Health.

Research has shown sucralose can cause shrinking of the thymus gland, an important immune system regulator, and liver and kidney dysfunction. A recent study by Duke University found sucralose reduces healthy intestinal bacteria, which are needed for proper digestion and can impact the effectiveness of prescription and other drugs.

The theory that Splenda may be a culprit in the rise of inflammatory bowel disease (IBD) appears to be a reasonable one, echoing the results from a 2008 study published in the Journal of Toxicology and Environmental Health,2 which discovered that Splenda:

In the featured paper, the author states that sucralose has a potent inhibitory effect on your gut bacteria and inactivates digestive protease. It also alters gut barrier function. All in all, this may help explain the pronounced increase in IBD in Canada since its introduction into the food supply.

Believe me, if you keep destroying up to half of your gut flora by regularly consuming Splenda, then poor health is virtually guaranteed! Making matters worse, most people are already deficient in healthy bacteria due to excessive consumption of highly processed foods, which is why a high quality probiotic supplement is a good idea for most people. If you add sucralose to an already unbalanced intestinal tract, health problems are very likely to ensue…

Genetically engineered ingredients are in more than 80% of the processed offerings on grocery store shelves. Big Agri and the FDA insist that these items are not hazardous to your health, but many, many studies disagree. These studies aren’t the ones that are touted all over mainstream mouthpieces like Forbes Magazine, however, because there’s a vast amount of money to be made from GMOs.

Back in 2009, the Institute for Responsible Technology rang the warning bell with regard to GMO ingredients:

On May 19th, the American Academy of Environmental Medicine (AAEM) called on “Physicians to educate their patients, the medical community, and the public to avoid GM (genetically modified) foods when possible and provide educational materials concerning GM foods and health risks.”[They called for a moratorium on GM foods, long-term independent studies, and labeling. AAEM’s position paper stated, “Several animal studies indicate serious health risks associated with GM food,” including infertility, immune problems, accelerated aging, insulin regulation, and changes in major organs and the gastrointestinal system. They conclude, “There is more than a casual association between GM foods and adverse health effects. There is causation,” as defined by recognized scientific criteria. “The strength of association and consistency between GM foods and disease is confirmed in several animal studies.”

…Among the population, biologist David Schubert of the Salk Institute warns that “children are the most likely to be adversely effected by toxins and other dietary problems” related to GM foods. He says without adequate studies, the children become “the experimental animals.”

Since there is no law requiring that GMO foods bear a warning label, the best way to avoid them is to limit processed foods, know the most likely GMOs (corn and soy), and look for the Non-GMO Verified label.

This popular additive can be found in…well, pretty much everything. It “enhances flavor” to make the cheapest ingredients seem delicious.  MSG can increase the production of histamines (an allergic/immune response) and also increases inflammation. Not everyone is allergic to MSG, but on varying levels, most people are sensitive to it. There’s a direct link between histamine production, inflammation, and a weakened immune system. MSGtruth explains:

If your community “supplements” tap water with fluoride, it may be decreasing your immune function.  The following excerpts are from a study published in the journal Complementary Medical Research.

“Fluoride is one of the most toxic inorganic chemicals in the Earth’s crust, but it is believed that at a concentration of 1ppm, or 1m g/mL in public water supplies, and at the concentrations used in dental preparations, it is both safe and beneficial to teeth. However, with increasing experience, doubts about both safety and efficacy have arisen. While there is evidence of harm to the stomach, kidneys, thyroid, bones and teeth at higher concentrations, evidence for harm at concentrations around 1m g/mL is controversial. A possible link between fluoridation of public water supplies and an increase in the cancer death rate has been debated for over 20 years and there is now no doubt that fluoride can cause genetic damage.

…concentrations of fluoride of 0.5, 1.0, 2.0 and 20.0 ppm significantly inhibit the ability of leukocytes to migrate after incubation for 3 hours at 37° C.

The immune system is our first line of defense against attack whether from the outside from bacteria, viruses and other parasites, or from within, from the spontaneous generation of potentially cancerous cells. Any agent which affects the ability of the immune system to function efficiently either by a direct toxic effect or by interfering with the release of cytokines will tend to reduce the resistance of the population to infection as well as increasing the susceptibility to cancer and immune depressed states such as the post-viral fatigue syndrome and AIDS. The effect on individuals already suffering from such immune-depressed conditions is likely to be serious.

Instead of getting needless vaccinations, avoid consuming immune system aggressors.

We live in a society that is always searching for easy, immediate gratification. We have pills to make us happy, pills to make us calm, pills to make us thin, pills to relieve pain, pills to wake us up, and pills to help us sleep. There are a lot of ways to avoid getting sick that don’t include popping a pill or getting a needle shoved in your arm, but many folks never consider taking those extra steps. It astonishes me that avoiding these ingredients causes people to consider my eating habits “extreme” but toxic chemical medications are perfectly normal and acceptable.

Before lining up for your flu shot or other “highly recommended” vaccine, put in the extra time and effort to remove these immune system aggressors from your diet. When your body isn’t busy fighting off neurotoxins, carcinogens, and good-tasting poison, you’ll be amazed at how effective it becomes at fighting off things like the flu or the common cold.

Now that you know what NOT to eat, next we’ll talk about what you SHOULD be eating to boost your immune function.