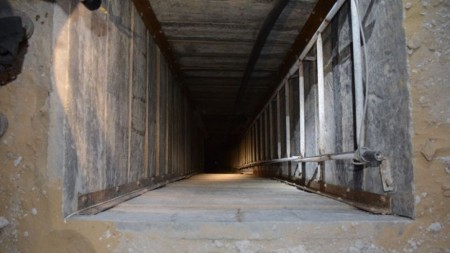 The opening was so small that CNN’s Wolf Blitzer — no physical giant — had to bend down to climb inside one of 30 or so Palestinian tunnels from Gaza to southern Israel.

“I guess the tunnel was built for relatively short people, because if you stand up you’re going to hit your head,” Blitzer said of the almost two-mile concrete corridor about 45 feet underground where he reported from Monday.

His visit, accompanied by the Israeli military, revealed conditions in the network of tunnels below Gaza that are a key issue in the current violent spasm between Hamas militants in Gaza and Israel.

Originally built to avoid Israeli and Egyptian checkpoints into Gaza, the tunnels have been vital supply lines for Palestinians in Gaza. Now the snaking underground routes increasingly get used for attacks in Israel.