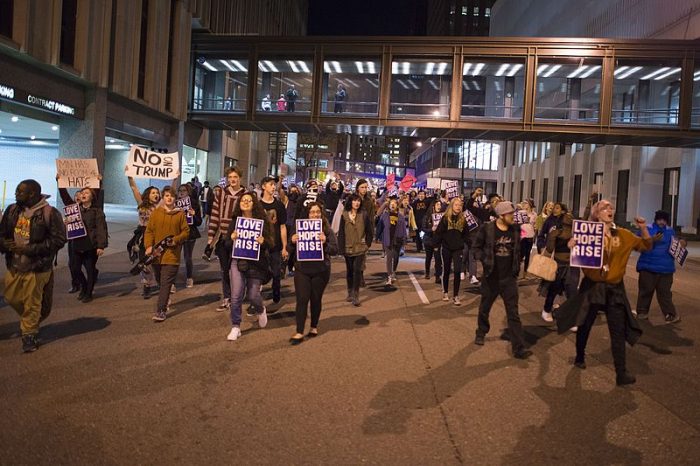 Here’s a quick definition that may ring familiar for those of you watching in awe at the unrelenting breathless drama.

Individuals with Histrionic Personality Disorder exhibit excessive emotionalism–a tendency to regard things in an emotional manner–and are attention seekers. People with this disorder are uncomfortable or feel unappreciated when they are not the center of attention.

Behaviors may include constant seeking of approval or attention, self-dramatization, theatricality, and striking self-centeredness or sexual seductiveness in inappropriate situations, including social, occupational and professional relationships beyond what is appropriate for the social context. They may be lively and dramatic and initially charm new acquaintances by their enthusiasm, apparent openness, or flirtatiousness. They commandeer the role of “the life of the party.” Personal interests and conversation will be self-focused. They use physical appearance to draw attention to themselves.

Emotional expression may be shallow and rapidly shifting. Their style of speech is excessively impressionistic and lacking in detail. They may do well with jobs that value and require imagination and creativity but will probably have difficulty with tasks that demand logical or analytical thinking. (source)

That sure sounds a lot like the liberals and celebrities freaking out of Trump’s every move.

Personally, I neither love nor hate Trump.

I agree with about half of what he’s done and disagree with the other half. But I can look at it rationally. I am not part of any political party, and I have no agenda other that living a life of freedom and peace. When his actions align with that, I’m pleased. When his actions threaten my freedom or peace, I’m displeased.

But for the love of cats.

I can be displeased without setting myself on fire, sobbing on camera, threatening terrorist actions, or planning a freakin’ assassination on Twitter.

Apparently, this is not an ability possessed by the Liberal/Progressive celebrities who are collectively and publicly losing their sh*t.

I keep thinking that it’s got to settle down.

Speaking from a mom-point-of-view, even when toddlers have the biggest, longest-lasting temper tantrums ever, eventually, they get worn and out go to sleep. Not so with the current crop of folks wielding their microphones and social media platforms.

Each day, there is a new and greater showing of blatant disrespect toward the President and his family.

Here are just a few examples.

What the heck, people?

I detested everything the Obama administration stood for, as did most of the people in my personal social network. But we never engaged in histrionic shenanigans like this. We didn’t make fun of his daughters on social media. We didn’t violently attack others because they liked him.

Anti-Trump protesters can say all they want that the President is taking unconstitutional acts, but where were they when Obama signed the Indefinite Detention Act into law? When he forced an unofficial tax that nearly broke the middle class through the “Affordable” Care Act? Heck, just go read one list of his unconstitutional actions.

This war on Trump is actually a war on ordinary Americans.

To look at any mainstream media outlet or social media platform, anyone from the outside looking in would wonder how on earth Trump possibly got elected. I mean, it’s obvious that everyone despises him, right?

Just like before the election, there’s evidence that the polls are skewed by oversampling. Polls are utterly meaningless.

But the president’s first two weeks in the White House raise questions about whether Trump is better viewed than traditional measures indicate — and whether the hard edge of some of his provocative stances and statements will make it difficult to accurately gauge his support right up until his likely reelection bid in 2020.

Pollsters are already studying the emerging phenomenon, though there’s no consensus yet on whether social desirability bias — respondents’ reticence to express support for Trump because they believe he is viewed negatively by others — is the main driver.

We’re looking like a nation that hates Trump, but it isn’t that cut and dried.

It’s mainly that the left-wing(nuts) in Los Angeles and New York hate Trump.

And what happens in Los Angeles and New York?

Entertainment. So-called news. These are the locations of most of America’s celebrities, who are ridiculously vocal and pretend to be experts on foreign policy, immigration, and (snort) the Constitution.

What people are missing is this essential fact.

When you possess all of the microphones and all of the platforms you can make it seem like your opinion is the only opinion.

You can make it seem like you speak for everyone with your outrage.

You can make it seem like your particular scapegoat is the worst person on the planet.

You can choose what will be seen as “the truth.”

It’s certainly true that President Trump has enraged the hyperventilating liberals with every stroke of his pen.

But do they speak for the broader population in the United States or do they just possess all the microphones?

9 thoughts on “Everyone In America Doesn’t Actually Hate Trump”