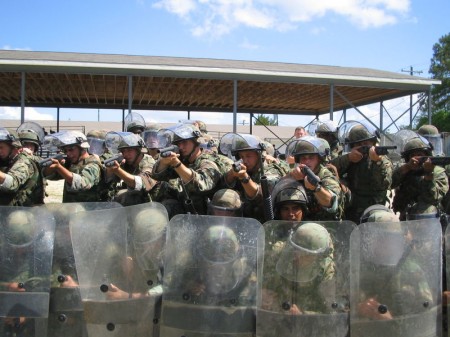 As illegal immigrants continue to spill across the U.S.-Mexico border, federal authorities are attempting to relocate the migrants from South Texas to housing facilities in states across the nation. One such facility is located in Murrieta, California, where a large group of protesters recently blocked a bus full of migrants from arriving. The protesters remain there, adamant that illegal immigrants don’t get dumped in their town. But soon the concerned citizens may be forced to step down–Breitbart Texas has learned that federal agents plan to arrive in Murrieta on Monday with riot gear to ensure that another busload makes it to the housing facility.

Jeremy Oliver, a resident of Temecula, California–a town that neighbors Murrieta–told Breitbart Texas that local police officers warned the protesters that “it’s going to get ugly.”

Oliver said, “The feds are pissed that they haven’t been able to use this facility. Officers out there warned people that federal agents will be in Murrieta on Monday–they are going to get the next bus through no matter what. Riot gear and shields will be used to push the crowd back.”