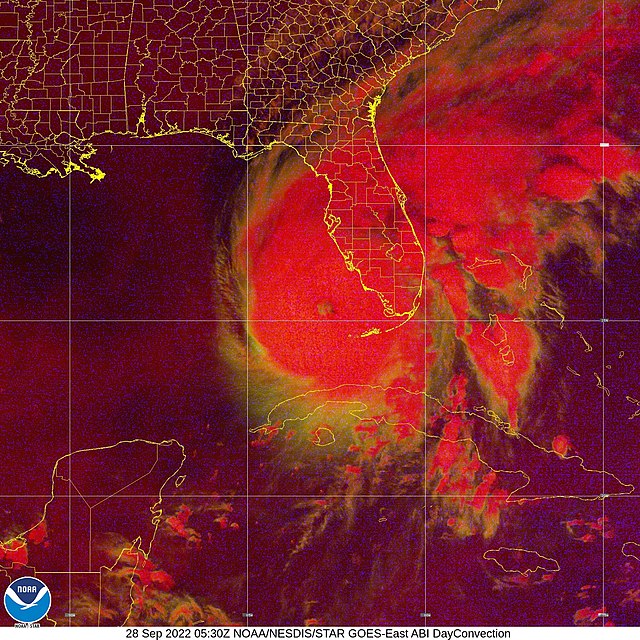 Can you imagine clinging to a wall with all of your might for hours in order to avoid certain death?  There are a lot of people that live along the west coast of Florida that barely survived Hurricane Ian, and in this article you will hear some of their stories.  This wasn’t just another storm.  Hurricane Ian had maximum sustained winds of 155 mph, and that put it just 2 mph away from being a Category 5 storm.  But the worst part was the giant wall of water that the storm pushed ashore.  The storm surge caused so much damage that it is already being projected that Ian is the most costly natural disaster in all of U.S. history.  The state of Florida will never be the same after this, and we should all mourn for those that have lost their lives.

Every time a hurricane makes landfall there is a lot of water, but many of those that live in the Fort Myers area were completely and utterly unprepared for the absolutely gigantic wall of water that Hurricane Ian brought with it…

As the sun rose on Florida’s Gulf Coast on Thursday, it revealed the devastating trail of destruction left in Hurricane Ian’s wake.

The area surrounding Fort Myers, known as the Lee Island Coast, saw the most catastrophic destruction, with storm surges reaching an estimated 12 feet in some areas, sweeping cars away and reaching the rooflines of homes.

The causeway connecting Sanibel Island with the mainland was destroyed in the raging Category 4 hurricane, and more than two million people were left without power after the monster storm barreled through.

During the peak of this storm, you were not likely to survive if you stayed at ground level.

So everyone was trying to get to a higher elevation, and in some cases people were taking desperate measures in order to do that…

Daniel Suarez, 39, and his wife Heather, 37, heeded warnings to flee their second floor apartment but their downstairs neighbors chose to stay behind.

‘Around 3pm their place was completely flooded. Their vehicle was floating around in the parking lot,’ Daniel told DailyMail.com.

‘The water was so strong they couldn’t push the front door open so they had to break through the drywall on to the stairwell then climb up and break into our apartment to get to safety.

They must have been really scared.  Can you imagine trying to break through drywall in the middle of a hurricane?

Many homes in Florida only have a single level, and in those cases there is no second level to go to for safety.

When water started pouring into the home of 39-year-old Samuel Martinez, he and his family initially went up to the roof.

But the winds were too powerful to stay on the roof, and so Martinez and his four cousins literally clung to an exterior wall of the home for hours…

Water began trickling into the one-story, Iona home around 8am. Ten minutes later it was up to two feet. It would eventually reach around 10ft high.

Martinez and his four cousins tried to take shelter on the roof but the winds were too powerful. They ended up clinging to an exterior wall for dear life.

‘It was up to our necks,’ he said. ‘We clung on for what seemed like hours praying the water would stop rising.

‘The home is completely trashed but we are alive. But I’m worried for my neighbors, one of them is a pregnant woman.’

You have got to have a strong will to live in order to make it through an ordeal like that.

If the water had gone just a foot or two higher, they may not have survived.

Sadly, there were many that didn’t make it.  We are being told that the death toll is in “the hundreds”, but of course that is just a very early estimate.

Florida has never experienced a storm quite like this, and after surveying the damage Lee County Sheriff Carmine Marcino told CNN that “there’s really no words that I can say to tell you what I’ve seen”…

“I just literally got out of a helicopter where I was able to take a complete tour of the entire county and there’s really no words that I can say to tell you what I’ve seen,” Lee County Sheriff Carmine Marcino said on CNN Thursday. “The Fort Myers Beach area, buildings, major, major homes and buildings completely washed away with vehicles in the water, vehicles in the bay, boats are upside down.”

The Fort Myers area is not going to be okay after this.

Do you remember watching footage of the historic tsunami that hit Fukushima?

Well, what Fort Myers just went through is something like that.

The water picked up objects that were extremely heavy and carried them vast distances.  In fact, the mayor of Fort Myers actually did an interview with CNN in the downtown area of his destroyed city while standing on a floating cement dock that Hurricane Ian had deposited there…

“I’m standing on a floating cement dock in the river district of downtown. The problem is, this dock is two blocks away from the river in a middle of an intersection,” Anderson told CNN on Thursday.

“This thing weighs a ton. That’s how powerful the water was last night.”

Countless individuals have had their lives completely turned upside down.

93-year-old Tom Hinkle was able to successfully ride out the storm, but he says that he lost his home, his car and everything else that he owned…

‘I’ve lost every damn thing I own,’ said 93-year-old retiree Tom Hinkle, as he stared out at the murky-broken floodwater making it impossible to reach his two-bed retirement home a thousand yards or so from the Gulf of Mexico.

‘I’ve lived in my home for 22 years and it’s gone. My car is even under water,’ he added, with tears in his eyes.

Hinkle made it out alive thanks to Good Samaritan Ray Remillard, 62, who gathered four elderly neighbors from the Sunshine Mobile Village, several miles from Fort Myers Beach, and took them to his company’s apartment further inland.

How do you possibly “start over” when you are 93 years old?

And how will the west coast of Florida “start over” now that hundreds of billions of dollars in damage has been done?

What has just transpired should deeply sadden all of us.

It is just one week after the end of summer, and we have already witnessed the most costly natural disaster in the entire history of our country.

Hurricane Ian was truly a “monster storm”, and it is just a matter of time before we are hit by even greater disasters.

Our world has become a very wild and unpredictable place, and global events are really starting to accelerate.

So let us mourn for all that was just lost, but let us also brace ourselves for what is ahead.

Because what we have been through so far is just the beginning.

Ft Myers Beach is effectively gone, almost no emergency crews yet. These poor people need so much help… pic.twitter.com/5uLo26zFMZ

Fort Myers Beach pier and nearby restaurants and structures have been destroyed. pic.twitter.com/LZuB2Q090M

Storm surge got into our WINK studios in Fort Myers, flooded the entire first floor. Lost power and was unable to continue broadcasting on tv/radio. No timetable on return to air. #Ian was the strongest hurricane in Southwest Florida history. Widespread destruction heading home. pic.twitter.com/w6is0EXcpD

Unbelievable amounts of water. This is NOT near the coast. This is CENTRAL FLORIDA! @weatherchannel #Ian @CityofKissimmee #flooding #HurricaneIan #Ianflorida #IanRescue For more updates go to https://t.co/AcRNA256uc and the Weather Channel app. You can also follow me on twitter pic.twitter.com/bae9SAy2nI