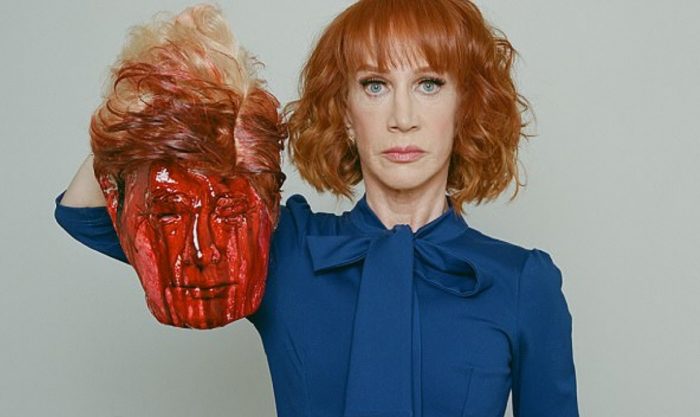 The image of Kathy Griffin holding up a bloody mock ‘decapitated’ head of Donald Trump will be burned into our memories forever, and she may have just produced the single most destructive moment for the radical left that this country has seen in decades.  It is perfectly fine to disagree with President Trump and his policies, but to hold up his ‘decapitated head’ like an ISIS executioner would goes far beyond anything that would ever be acceptable in a civilized society.  This is a moment that absolutely screams “too far”, and I believe that it will be this moment that causes many Americans to finally realize that the hate-filled ideology of the radical left is entirely bankrupt.

At this point the radical left doesn’t have any sort of positive message to offer the American people.  They hate that wealthy people have so much money and so they want to raise taxes.  They hate capitalism and use every opportunity that they can to try to destroy it.  They hate conservative Christians and so they mock Jesus and the Christian faith every chance they get.  They pander for money and votes by pitting one racial group against another.  They are all about killing liberty, killing freedom, killing babies, and killing the values that this nation was founded upon.  And they have demonstrated over and over again that they are willing to use violence to achieve their goals.

“CNN has terminated our agreement with Kathy Griffin to appear on our New Year’s Eve program,” spokesman Shimrit Sheetrit confirmed to USA TODAY in a statement Wednesday.

The network used even stronger language a day earlier: “We found what she did disgusting and offensive,” read a statement sent to USA TODAY Tuesday night by Sheetrit. “We are pleased to see she has apologized and asked that the photos be taken down.”

And even her old buddy Anderson Cooper denounced her on Twitter…

For the record, I am appalled by the photo shoot Kathy Griffin took part in. It is clearly disgusting and completely inappropriate.

It is hard to imagine that Kathy Griffin will have much of a career left after all of this, so hopefully she has been saving her money.  In fact, she has already lost a major endorsement deal…

Squatty Potty, a Utah-based business that creates and sells bathroom products — including a popular toilet stool made famous by one of the company’s well-known viral videos — has decided to pull down a new ad that Griffin stars in.

“We were shocked and disappointed to learn about the image Ms. Griffin shared today,” Squatty Potty CEO Bobby Edwards said in a statement issued to Faithwire. “It was deeply inappropriate and runs contrary to the core values our company stands for.”

I don’t know what she thought would happen.  If a conservative had done the same thing to Obama, we would probably be talking about prison time right about now.  Griffin went so far over the line that even the Church of Satan has disavowed her.

And of course this isn’t the first time that she has done something like this.  During a 2007 awards show, she openly mocked the name of Jesus.  What she said was so horrible that I do not want to repeat it.

Surprisingly, not everyone on the left is turning their backs on Griffin.  In fact, Democratic Senator Al Franken says that he is not going to cancel an appearance with Griffin that is scheduled for July.

Al Franken will be up for re-election in 2020, and I think that it is time for the people of Minnesota to find a new senator.

Of course I think that things are going to be very difficult for most liberal Democrats moving forward.  If anger and hate are the core of your message, and if you survive by constantly pitting one group against another, eventually the American people are going to see through the games and will start choosing another direction.

Whether she intended it or not, Kathy Griffin is now the poster child for the radical left in this country, and she just did Trump and the Republican Party a huge favor by showing the true face of her movement.  I really like how Mike Adams made this point…

There’s no other way to say it: Kathy Griffin and the deranged, lunatic Left are mentally ill and pose a very real danger to society. This wretched, terrorist-style beheading video posted by Griffin encourages deadly violence against Trump supporters and sends a message that murdering political opponents of the intolerant Left is a normal, acceptable activity.

That’s what the deranged Left already believes, of course. Fanned into flames by a wildly dishonest, discredited fakestream media, Trump Derangement Syndrome has now escalated into a left-wing murderous rage that now celebrates gruesome images of beheadings that were once the sole domain of fanatical terrorists. What’s even more disturbing about all this is that Kathy Griffin apparently thought posting a video showing a bloodied, decapitated Trump head in her fist would somehow be hilarious or inspiring in some twisted way.

So how should we respond to all of this?

Instead of responding to this kind of hate with even more hate, I propose that we respond with lots of love.

Let’s show the American people that there is a fundamental difference between the right and the left.  Let’s show them that true conservatives are all about loving everyone and doing everything that we can to promote life, liberty and the pursuit of happiness.  Let’s show them that we believe in a positive, united future for our country based on the values and principles that are enshrined in the United States Constitution.

We don’t have to attack Kathy Griffin because she has already destroyed herself and done an immense amount of permanent damage to her political movement.

The American people are going to be looking elsewhere for inspiration, and we should be ready to supply it.  If we can clearly communicate a positive, uplifting message, we can start to clear out the cesspool that Washington D.C. has become and begin to build a brighter future for all Americans.

10 thoughts on “Has Kathy Griffin Produced A Defining Moment That Will Cause America To Reject The Hate-Filled Ideology Of The Radical Left?”