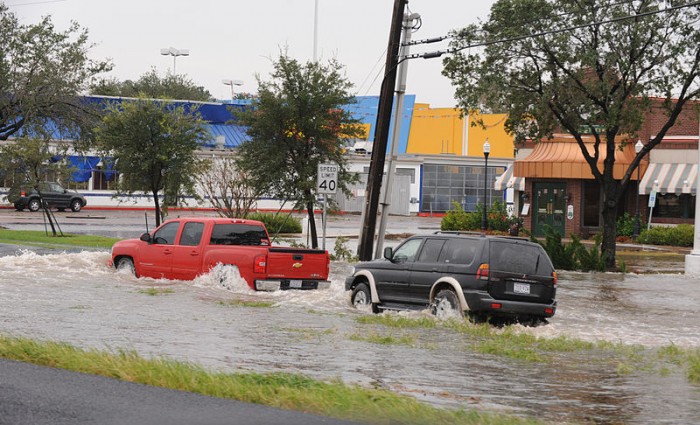 Why has the United States been hit by historic flood after historic flood in recent months? The flooding that is pummeling the city of Houston is the 8th historic flood in this country since the end of September. City officials down in Houston have labeled the flooding that is currently slamming the city “a life-threatening emergency“, and they are insisting that “Houston residents should avoid travel at all costs today.” At this point, dozens of subdivisions have been flooded and major sections of Interstate 10 and Interstate 45 are under water near downtown. Authorities are telling us that water is getting to areas that it has never been before, and Fire Department spokesman Jay Evans announced that the water is already 10 to 15 feet deep in some areas. But even though some parts of Houston have already gotten close to 20 inches of rain within the last 24 hours, there is more rain in the forecast, so this crisis is far from over.

The giant storm that has caused all of this rain was a complete surprise to many residents of Houston. A lot of people woke up on Monday morning to discover that their neighborhoods now resembled Waterworld. The following comes from the Chicago Tribune…

More than a foot of rain fell Monday in parts of Houston, submerging scores of subdivisions and several major interstate highways, forcing the closure of schools and knocking out power to thousands of residents who were urged to shelter in place.

Sylvester Turner, mayor of the nation’s fourth-largest city, told residents to stay home to fend off a weather system he called “stubborn.” More rain was projected over the next two to three days although heavy downpours had subsided somewhat by midday and only another half-inch was expected through Monday night, he said.

If this flooding was just an isolated incident, it wouldn’t really be that big of a deal.

But the truth is that this flooding in Houston continues a very disturbing pattern that began in early October of last year.

Since the end of September, the U.S. has been hit by 8 historic floods, which works out to an average of more than one a month. For this article, I wanted to update a list of these historic floods that I started in a previous article…

Never before has the United States experienced so many historic floods in such a compressed period of time.

Some believe that “climate change” is responsible for these bizarre weather patterns, others are pointing the finger at El Nino, and yet others believe that this is a sign that we are approaching “the last days” described in the Bible.

What everybody should be able to agree on is that what we are witnessing is highly, highly unusual.

Historic floods have hit almost every region of the country since the end of September, and the economic damage that has been caused has been immense.

Hopefully we will get a break from all of this flooding soon, but I wouldn’t count on it.