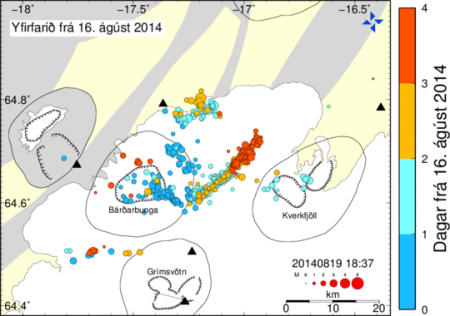 An intense earthquake swarm continues to rattle Iceland’s Bardarbunga volcano, adding to fears that a potential eruption could disrupt the region’s air traffic. Weather officials say they detected about 1,000 small quakes through Tuesday night, which were triggered by an unusually strong earthquake on Monday. The tremors are tied to the increasing movement of magma underground. “Similar to recent days, two pulses of comparably strong seismic activity have been measured between 04:00 (GMT) and 08:00 this morning, as well as 16:00 and 18:30 in the afternoon,” the Icelandic Met Office wrote on Tuesday night, according to a post published this morning. Met officials this week issued an “orange” aviation warning – the fourth-highest on a five-grade scale – following a magnitude-4.0 earthquake on Monday, the strongest in the region since 1996. The warning indicates “heightened or escalating unrest with increased potential of eruption.” The Bardarbunga last erupted in 1910, though according to the Met Office, seismic activity has been gradually increasing around the volcano over the past seven years.