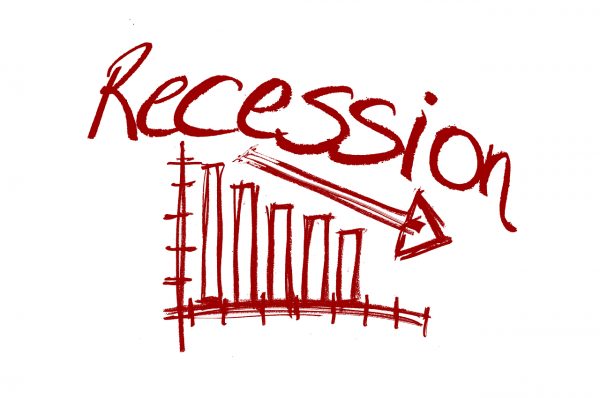 Freight shipments within the US by all modes of transportation – truck, rail, air, and barge – fell 5.9% in July 2019, compared to July 2018, the eighth month in a row of year-over-year declines, according to the Cass Freight Index for Shipments, which tracks shipments of consumer and industrial goods but not of bulk commodities such as grains. This decline along with the 6.0% drop in May were the steepest year-over-year declines in freight shipments since the Financial Crisis

When something happens for eight months in a row, that is definitely a trend, and we haven’t seen declines of this magnitude since the last recession.

And other numbers confirm what the Cass Freight Index is telling us. For example, ACT Research says that the trucking industry is officially in a recession after “two consecutive quarters of negative growth”…

The trucking industry is officially in a recession, according to data tracked by ACT Research.

After months of suggesting a pullback was possible, ACT President Kenny Vieth told FreightWaves on Thursday, July 11 that all metrics his firm tracks meet the technical definition of a recession – two consecutive quarters of negative growth.

“Every freight metric we look at has been negative for at least six months,” he said.

Of course it is possible that the transportation industry could pull out of this recession without the U.S. economy as a whole dipping into one, but I wouldn’t count on it this time.

As I have been documenting for months, just about every economic indicator is telling us that big trouble is ahead.

And more bad news just keeps rolling in on a daily basis. In fact, we just learned that yet another major retailer is shutting down all of their stores…

On Wednesday, the company announced plans to close all 222 stores across 33 states. Everything from clothing to store fixtures will be sold from locations across America, according to a press release.

Usually major retailers don’t do this sort of thing so late in the year. If at all possible, there is usually an all-out effort to hang on through the highly lucrative Christmas season, and so things must have been really bad for Avenue Stores to pull the plug here in mid-August.

And all of this is happening even though interest rates are still much lower than the long-term average and the federal government is borrowing and spending money like there is no tomorrow. According to Wolf Richter, our national debt is up by more than a trillion dollars over the last 12 months…

The US Gross National Debt has jumped by $363 billion in the two weeks since President Trump signed the law that suspended the debt ceiling. This surge pushed the total debt to $22.39 trillion. That’s up by $1.01 trillion from 12 months ago. And these are the good times.

This is emergency level spending, and it has been happening while the U.S. economy has still been relatively stable.

When the federal government borrows money that it does not have and spends it into the economy, that tends to boost overall economic activity and raise GDP numbers. This was Barack Obama’s favorite economic trick, and Donald Trump has followed right in his footsteps. But of course in the process we are literally destroying the bright future that our children and our grandchildren were supposed to have. What we are doing to future generations of Americans is beyond criminal, and all of us should be deeply disgusted by what is happening.

But of course the politicians in D.C. are deathly afraid to do anything about our exploding debt, because if we cut spending to sustainable levels that would immediately plunge the U.S. economy into a horrific recession. And when bad economic times come, voters tend to vote out the people that are already holding office.

For President Trump, keeping the U.S. economy out of a recession is absolutely critical to his chances of winning in 2020, and he knows it.

His opponents know it too, and that is why many of them are openly rooting for a recession. For instance, just check out what Bill Maher said on his show on Friday…

HBO’s Real Time host Bill Maher made another desperate plea for a recession on Friday, saying that the economic downturn “would be very worth getting rid of Donald Trump.”

“So I’ve been saying for about two years that I hope we have a recession,” Bill Maher said. “And people get mad at me, as Sean Hannity thinks I’m actually causing a recession. I’m just saying we can survive a recession. We’ve had 47 of them. We’ve had one every time there’s a Republican president.”

“So, yes, a recession would be very worth getting rid of Donald Trump and these kind of policies,” Maher said after citing a dubious United Nations report that claims a million species are at risk of extinction.

On the other side, President Trump and his team are going to try to make things seem as rosy as possible between now and election day.

Top White House economic adviser Larry Kudlow said Sunday he does not forecast a recession “at all,” despite warning signs exhibited by the bond market last week.

“First of all, I don’t see a recession at all,” Kudlow told “Fox News Sunday.” “Second of all, the Trump pro-growth program, which I believe has been succeeding – lower tax rates, big rollback of regulations, energy opening, trade reform – we’re gonna stay with that. We believe that’s the heart of the free enterprise. We want an incentive-oriented supply-side economy, providing opportunities for everybody across the board.”

In the end, it really isn’t going to matter who is in the White House. What is coming to America is going to be extremely painful, and we are about to reap the consequences for decades of incredibly foolish decisions.

How we view reality should never be distorted based on what political party we identify with. When we willingly choose not to see things objectively, we become very susceptible to deception.