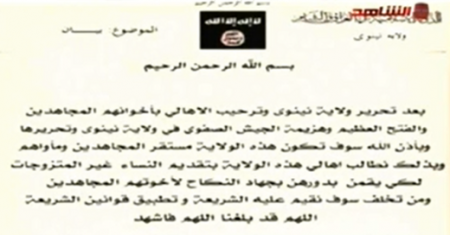 On June 12, only two day after capturing Mosul and other territories in Iraq, the Islamic State of Iraq and Syria issued a decree ordering the people to send their unmarried women to “jihad by sex.” In the proclamation ISIS threatens to impose Sharia law on all who fail to comply with the decree.

Here’s a translation of the decree, followed by the original in Arabic.

Subject: Mandate LOGO The Islamic State of Iraq and Syria
The State of Nineveh

After liberation of the State of Nineveh, and the welcome shown by the people of the state to their brotherly mujahideen, and after the great conquest, and the defeat of the Safavid [Persian] troops in the State of Nineveh, and its liberation, and Allah willing, it will become the headquarters for the mujahideen. Therefore we request that the people of this state offer their unmarried women so that they can fulfill their duty of jihad by sex to their brotherly mujahideen. Failure to comply with this mandate will result in enforcing the laws of Sharia upon them.

Translated for by Dr. Samir Johna.