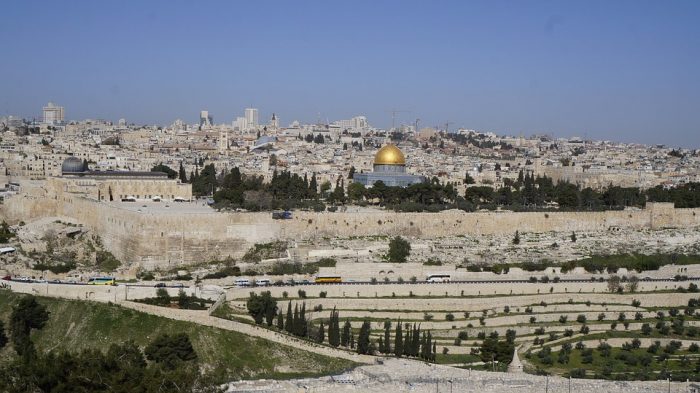 Is President Trump about to recognize Jerusalem as the capital of Israel? If so, this would be one of the most historic events to happen in the Middle East in a very long time. Needless to say, the government of Israel would be absolutely thrilled by such a move, while the Palestinians and Israel’s neighbors would not be pleased at all. In fact, some Palestinians have suggested that if the Trump administration actually moves the U.S. embassy to Jerusalem that it could spark widespread violence or even war.

But Donald Trump promised that he would recognize Jerusalem as the capital of Israel during the campaign, and it looks like he intends to keep his word…

A senior U.S. administration official said on Thursday that President Donald Trump is considering recognizing Jerusalem as the capital of the State of Israel without moving the embassy to the Israeli capital, at least for the time being.

Trump wants the recognition of Jerusalem to be a gift to Israel on the occasion of its 70th Independence Day, and he may even announce this recognition by means of a statement to be made by Vice President Mike Pence, who will visit Israel in December.

Pence will be visiting Israel next month, and he is scheduled to deliver an address to the Knesset. If the Trump administration is going to recognize Jerusalem as the capital of Israel, it is believed that it may happen at that time.

Israel became a nation in 1948, and so 2018 will be Israel’s 70th anniversary. There will be independence celebrations throughout the year, and recognizing Jerusalem as Israel’s capital as we approach this highly significant time would be considered a great gift to the Jewish people.

For the moment, however, the Trump administration will not be moving the U.S. embassy to Jerusalem. The White House recognizes that such a move could spark violence in the region, and so administration officials are treading carefully…

President Donald Trump and his senior aides are mulling a plan to eventually move the U.S. Embassy in Israel from Tel Aviv to Jerusalem, a decision that could derail Trump’s attempts to restart peace talks between the Israelis and the Palestinians.

A leading option under consideration: temporarily keeping the U.S. embassy in Tel Aviv while also outlining a longer-term strategy to begin the process of moving the embassy to Jerusalem, according to two administration officials. The plan is meant to strike a middle ground on the politically treacherous issue.

We shall see how this plays out, but Vice-President Mike Pence sure sounds optimistic that moving the embassy will actually happen. Earlier this week, he posted the following message on Twitter…

While for the past 20 years, Congress and successive administrations have expressed a willingness to move our embassy, @POTUS Trump is actively considering when and how to move the American Embassy in Israel from Tel Aviv to Jerusalem. #70toIsraelUN

Of course moving the embassy would have very serious ramifications, and without a doubt many those surrounding Trump are advising against such a move…

American intelligence circles may caution Trump against the move, warning of the security-related ramifications that could ensue and danger that it could pose to American embassies around the world.

Rumors of Trump’s planned announcement were met with warnings from Jordan’s King Abdullah II, who said during a visit to the US that “the transfer of the American embassy to Jerusalem at this stage will have repercussions in the Palestinian, Arab and Islamic scene.”

I will be even more blunt. If the U.S. embassy is moved to Jerusalem, there will definitely be violence, and it could potentially move us closer to armed conflict in the Middle East.

But U.S. policy should never be dictated by threats of violence. Moving the U.S. embassy to Jerusalem is the right thing to do, and we cannot allow anyone to intimidate us. In 1995, Congress passed a law that requires the U.S. embassy to be moved to Jerusalem, but ever since then presidents have used “waivers” to delay the move.

The current “waiver” expires on December 1st, and Trump is expected to sign another one at that time.

But even if the U.S. embassy is not moved to Jerusalem any time soon, the truth is that the next major war in the Middle East seems to be getting closer with each passing day. Just check out some of the things that have happened over the past week…

-Saudi Arabia just intercepted another ballistic missile that was fired from Yemen. The civil war in Yemen is essentially a proxy war between Saudi Arabia and Iran, and the Saudis hold the Iranians directly responsible whenever a missile is fired toward their territory.

-China has announced that they will be sending “elite troops” into Syria to fight alongside the Syrian army in the ongoing civil war that is raging there.

-Just a few days ago, the Pentagon acknowledged that there are approximately 2,000 U.S. troops currently in Syria working with forces that would like to overthrow the Syrian government.

The Middle East is a tinderbox that could literally erupt at any moment. Most Americans have absolutely no idea how close we are to a major regional war, and let us pray that one does not happen any time soon.