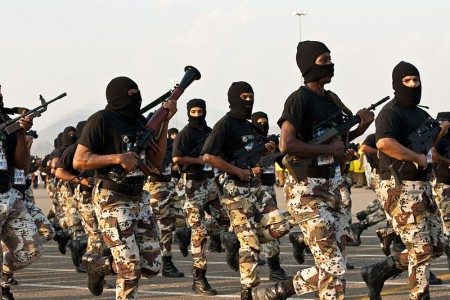 Thursday, June 26, the day before US Secretary of State John Kerry was due in Riyadh, King Abdullah summoned a National Security Council meeting “upon the current security events in the region, especially in Iraq,” and ordered “all necessary measures to protect the kingdom against terrorist threats.” This meant a general call-up of military units for a high level of preparedness.

Debkafile’s military sources disclose that Egypt is assembling an expeditionary commando force to fly to Saudi Arabia and bolster its border defenses.

This flurry of Saudi-Egyptian military steps comes in the wake of intelligence gathered by Saudi reconnaissance planes showing Iraqi Al Qaeda-linked Sunni fighters (ISIS) heading for the Saudi border and aiming to seize control of the Iraqi-Saudi crossing at Ar Ar (pop: 200,000).

ISIS and its Sunni allies are still on the march after capturing Iraq’s border crossings with Syria and Jordan earlier this week.