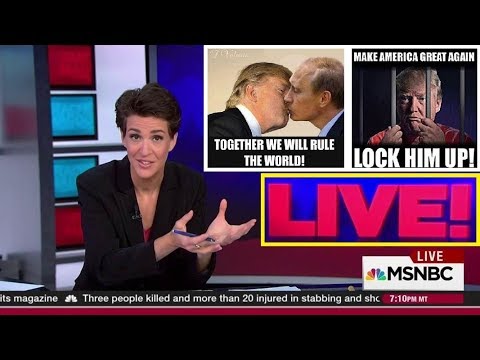 Now that the Mueller investigation is over and his report has shown that there was absolutely no collusion between the Trump campaign and the Russian government, the focus is rapidly turning to those that endlessly propagated extremely damaging conspiracy theories about the president of the United States. For 675 days, CNN, MSNBC, ABC, CBS and NBC engaged in a fake news binge unlike anything that we have ever seen before in all of U.S. history. They relentlessly pushed out news story after news story touting that we would soon have “evidence” that Trump had colluded with the Russians when there was no evidence at all. They kept telling us that “indictments are coming”, that “the noose is tightening” and that “the walls are closing in on this administration” when none of that was ever true. The entire Russian collusion narrative was a piece of fiction created by Hillary Clinton’s campaign team to explain her shocking election loss, but once it was embraced by the mainstream media and pro-Clinton members of federal law enforcement agencies it quickly snowballed out of control. Now the time has come for the mainstream media to be held accountable for lying to the American people on a massive scale, and later in this article I will explain how this can be done.

And I am certainly not the only one calling for the mainstream media to be held accountable. Other prominent conservative voices are also calling for accountability…

Donald Trump Jr lamented “more than two years of non-stop conspiracy theories from CNN, MSNBC, BuzzFeed and the rest of the mainstream media” and added: “It’s my hope that honest journalists within the media have the courage to hold these now fully debunked truthers accountable and treat them with the scorn and ridicule that they so deserve.”

Sean Hannity, a Fox News host in frequent contact with the president, was quick to assist. He issued a series of ominous warnings, variously concerning conspiracy theories, lies and attempts to rig elections.

“CNN, MSNBC, and the mainstream media have lied to the the [sic] American [sic] for [two] plus years,” Hannity said in a tweet. “Now they will be held accountable.” Another post took a cavalier approach to punctuation: “MSNBC CONSPIRACY NETWORK LIARS FAKE NEWS CNN LIARS NY TIMES WAPO LIARS.”

We are talking about a mountain of lies that is absolutely colossal. According to Axios, more than half a million articles were pumped out by the mainstream media over the course of the Mueller investigation…

Since May 2017, 533,074 web articles have been published about Russia and Trump/Mueller, generating 245 million interactions — including likes, comments and shares — on Twitter and Facebook, according to data from social-media analytics company NewsWhip.

The reason why tens of millions of Americans expected President Trump to be impeached was because it had been pounded into their heads day after day after day.

But it was a complete and utter lie the entire time.

Anyone with half a brain could see very early in the investigation that there was nothing there. When I ran for Congress, I told the entire state of Idaho during a televised debate that the Mueller investigation was nothing more than a witch hunt and that it should be immediately shut down. But of course that didn’t happen, and Robert Mueller spent 675 days turning over every rock that he possibly could, and after all that time he never found any evidence of collusion with Russia.

Sadly, the lack of evidence didn’t stop the mainstream news networks from relentlessly pounding on this story night after night…

From January 20, 2017 (Inauguration Day) through March 21, 2019 (the last night before special counsel Robert Mueller sent his report to the Attorney General), the ABC, CBS and NBC evening newscasts produced a combined 2,284 minutes of “collusion” coverage, most of it (1,909 minutes) following Mueller’s appointment on May 17, 2017.

That’s an average of roughly three minutes a night, every night, for an astonishing 791 days — a level of coverage normally associated only with a major war or a presidential election. In fact, TV reporters devoted more airtime to the Russia investigation than any of the Trump administration’s policy initiatives — immigration, tax reform, trade, North Korea, ISIS, the economy, veterans’ affairs, the opioid epidemic, to name but a few. Since his presidency began, nearly one-fifth (18.8%) of all of Trump’s evening news coverage has been about this one investigation.

Clearly the mainstream media has greatly wronged the American people.

Well, President Trump himself once suggested a potential remedy…

“With all of the Fake News coming out of NBC and the Networks, at what point is it appropriate to challenge their License? Bad for country!” Trump, a Republican, wrote in a post on Twitter on Wednesday.

In this day and age when everyone is so concerned about “fake news”, why can’t we challenge the broadcast licenses of all the big mainstream news networks?

After all, they all willingly participated in propagating the biggest fake news hoax in all of U.S. history even after it became exceedingly clear that it was a giant sham.

And one of the biggest names in the mainstream media, Matt Taibbi, says that the “sheer scale of the errors and exaggerations this time around” absolutely dwarfs the lies that were told about weapons of mass destruction in Iraq…

As a purely journalistic failure, however, WMD was a pimple compared to Russiagate. The sheer scale of the errors and exaggerations this time around dwarfs the last mess. Worse, it’s led to most journalists accepting a radical change in mission. We’ve become sides-choosers, obliterating the concept of the press as an independent institution whose primary role is sorting fact and fiction.

We had the sense to eventually look inward a little in the WMD affair, which is the only reason we escaped that episode with any audience left. Is the press even capable of that kind of self-awareness now? WMD damaged our reputation. If we don’t turn things around, this story will destroy it.

The mainstream media certainly deserves to collapse, and nobody should mourn them when they are gone.

Once upon a time in America, the news media consisted of highly trained journalists that tried really hard to stick to the facts.

But now it is filled with political hacks that don’t even try to hide their hatred for President Trump and Republicans.

A “media revolution” is just one of the areas we need to tackle if we are to have any hope of ever turning this country around. If we want to be a nation of integrity, those that have greatly violated our trust must be held accountable.

One of the things that I greatly appreciate about President Trump is that he is the first president in modern American history to stand up and call the mainstream media a bunch of liars.

Because that is precisely what they are, and America would be a much better place if all of the big media companies were to go out of business.