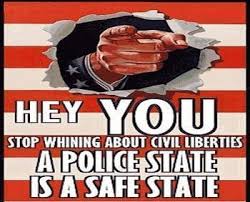 The following video footage, captured by Avel Amarel and uploaded to Youtube, shows how easy it is to stop police state tactics dead in their tracks.

When two police officers show up at the door claiming to be looking for a wanted fugitive, Avarel begins recording.

What you’ll see is nothing short of shocking, as police attempt to first enter his home without a warrant, and then attempt to turn him into a criminal for refusing to submit to their demands.

Keep in mind that entire conversation takes place on Avarel’s doorstep, with him standing inside of his home as police continue to push their way forward making unlawful demands.

But instead of intimidating him into submission, they get a lesson in the U.S. Constitution and the letter of the law.

1 thought on “Must-See Police State Video: ‘You Are At My Door With Guns And I Fear For My Life… I Have Committed No Crime’”