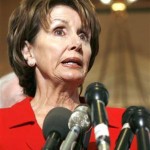 Nancy Pelosi is saying that “every aspect of our lives must be subjected to an inventory” in order to combat global warming.  In other words, that means that the government should watch and control even the little details of our lives to make sure that we aren’t doing anything to harm the environment.  Do any of you still not believe that we are headed for a total control “big brother” police state?

South Korean and U.S. troops are on high alert amid growing fears that a full-scale war will erupt on the Korean peninsula.

Another “super embassy fortress” in the Middle East?   Barack Obama has asked for $736 million to build a gigantic new U.S. embassy in Islamabad, the capital of Pakistan.  Excuse me, Mr. President, but there are millions of hurting people in this country who could use a little of that.

One major U.K. newspaper is claiming that the torture pictures that Barack Obama does not want to release include pictures of apparent rape and sexual abuseby U.S. personnel.  Will we ever find out the truth?

Police in Oklahoma stopped an ambulance carrying a woman to the hospital and viciously attacked an EMT.  What are our police turning into?

Japanese researchers have genetically engineered monkeys with hair, skin and blood that glow green under a special light, and who have now passed on these traits to their offspring.  Does anyone actually think that this is a good idea?

NewScientist has a new article out with this headline: Christians Battle Each Other Over Evolution.  The atheists are sure to have a good chuckle over this one.

New research indicates that the cells of people who use multivitamins have a younger “biological age” than those who don’t use them.

Medical experts are now predicting that childhood diabetes will double by the year 2020.  Perhaps someone should ask why this is happening and try to stop it.

Financial analyst Bob Chapman is forecasting that the dollar is headed for a hard fall.

Will a new proposal by the Obama administration actually give the Federal Reserve MORE power?

Lastly, two high profile attorneys who squared off in the legal battle over the 2000 U.S. presidential election have now teamed up in order to challenge California’s gay marriage ban.  If their lawsuit is successful,  it would allow homosexual couples to marry anywhere in the United States.