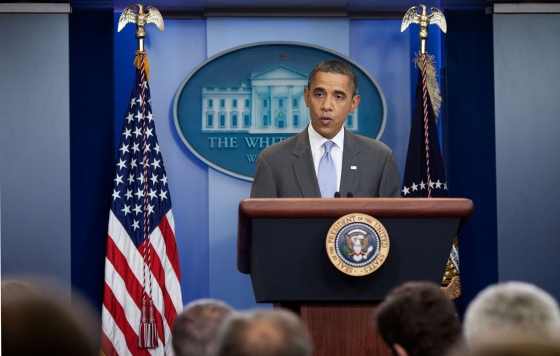 President Obama yesterday declared that the ISIS ideology cannot be defeated with guns, and that it will take “a more attractive and compelling vision” to defeat the terror group.

“Ideologies are not defeated with guns, they are defeated by better ideas” Obama clarified in a statement.

The President was meeting with military leaders at the Pentagon when he made the comments.

Perhaps Obama should have considered this notion before continuing the policy of flooding the chaotic Middle East with weapons.

As InfoWars has tirelessly documented, US weapons have fallen into ISIS hands time and time again and bolstered the terror group via the insane policy of arming and training so called ‘moderate rebels’ in Libya, Syria and Iraq.

The CIA has shipped weapons to al-Qaeda affiliated groups in Syria since at least 2012, a fact reported by The New York Times.

Up until late 2014, the US still claimed it was arming “moderate” mercenaries in Syria to fight against ISIS and the al-Assad government in Damascus despite the fact there are no longer any moderate forces active.

Where were the “better ideas” when it mattered?

Iraqi intelligence even claims that the US is INTENTIONALLY dropping weapons to known ISIS linked groups of rebels.

Whether you believe this or not, it is clear that the terror group already have US weapons. It’s a policy that dates back decades, and has always ended in chaos and what the CIA has termed “blowback”.