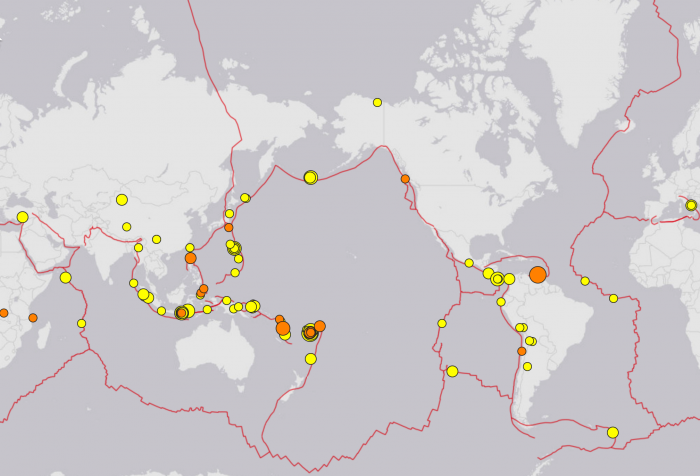 Within the past few days, we have seen an enormous magnitude 7.3 earthquake hit Venezuela and a giant magnitude 8.2 earthquake hit Fiji. Where will the next one strike? To many of us, it is becoming exceedingly clear that something very unusual is happening to our planet. I went and looked it up, and I was astounded to learn that the crust of the Earth has been shaken by 144 major earthquakes over the last 7 days, and that includes more than 50 on Sunday alone. And remember, these are not small earthquakes. The USGS considers any earthquake that is at least magnitude 4.5 to be “significant”, and they are happening so rapidly right now that it is difficult to keep up with them.

Usually, only earthquakes that cause death and destruction get attention from the mainstream media, and that was definitely the case with the huge quake that hit the northern coast of Venezuela on Tuesday…

A major earthquake of magnitude 7.3 struck the northern coast of Venezuela on Tuesday and shook buildings as far away as the capital, Caracas, the U.S. Geological Survey said.

The quake was centered near the town of Carupano, an area of poor fishing communities and was felt as far away as neighboring Colombia to the east and nearby island nations like Trinidad and Tobago, and St. Lucia, to the west and north.

This is certainly the last thing that the people of Venezuela need at the moment. Their currency was just devalued again, and at this point it is so worthless that people are literally throwing it into dumpsters.

According to media reports, the quake lasted for approximately two minutes, and it really shook people up. The following comes from Reuters…

“I feel like I’m about to faint. I’m shaking. It was long,” said telemarketing worker Sheny Fuentes, 22, speaking outside her work building in eastern Caracas. “I’m relieved that it doesn’t seem like damage was that bad. We would have been even more affected (given Venezuela’s economic crisis) – there are already people eating from the garbage and buildings aren’t well made,” she told Reuters.

The other day I noted that the magnitude 8.2 quake that just hit Fiji was the second largest “deep focus” earthquake ever recorded, and this quake in Venezuela was highly unusual as well.

In fact, seismologist Stephen Hicks says that it was one of “the largest ever recorded” in that entire region…

M7.3 earthquake today along the northern coast of Venezuela is one of the largest ever recorded earthquakes along the boundary between the Caribbean & South American plates. There was an M7.7 quake to the west in 1900 but this will have preceded detailed instrumental recordings

And this earthquake came right on the heels of an extremely active 48 hours for global seismic activity.

According to the Daily Mail, the “Ring of Fire” was shaken by a total of 69 major earthquakes on Sunday and Monday…

Sixteen ‘significant’ tremors – those at magnitude 4.5 or above – shook the Pacific ‘Ring of Fire’ on Monday, following a spate of 53 that hit the region Sunday.

The vast majority of the earthquakes that shake our planet take place along the Ring of Fire. It roughly encircles the Pacific Ocean, and it runs right up the west coast of the United States.

As the Ring of Fire has become more seismically active over the past several months, it has increased concerns that “the Big One” may soon be coming to California. Just check out this excerpt from a Daily Mail article that was just published…

The tremors have raised concerns that California’s ‘Big One’ – a destructive earthquake of magnitude 8 or greater – may be looming.

Scientists have previously warned that Ring of Fire activity may trigger a domino effect that sets off earthquakes and volcanic eruptions elsewhere in the region.

Scientists assure us that it is only a matter of time before the west coast is hit by major seismic events, and I even included a major seismic event on the west coast in my apocalyptic novel about the future of America. We are seeing earthquakes increase in frequency and intensity all over the planet, and they are starting to happen in places that we don’t normally expect. For instance, just check out what happened in Italy last week…

A number of earthquakes struck the region of Molise on the nights of August 15th and August 16th and the morning of August 17th. An earthquake was also felt in Le Marche near the port city of Ancona.

A magnitude 5.2 earthquake struck four kilometres from the southeastern town of Montecilfone, a village of 1,348 people, in the region of Molise, on the night of August 16th just after 8pm, according to Italy’s National Institute for Geophysics and Vulcanology (INGV), which monitors seismic activity.

But until major shaking starts happening in the continental United States, most Americans are not going to pay attention.

It simply is not “normal” for 144 major earthquakes to happen in just one week. In addition, dozens of volcanoes are currently erupting all over the globe. We appear to have entered a time when the crust of our planet is going to become increasingly unstable, and it doesn’t take a genius to figure out that this is going to have very serious implications for the future of our society.