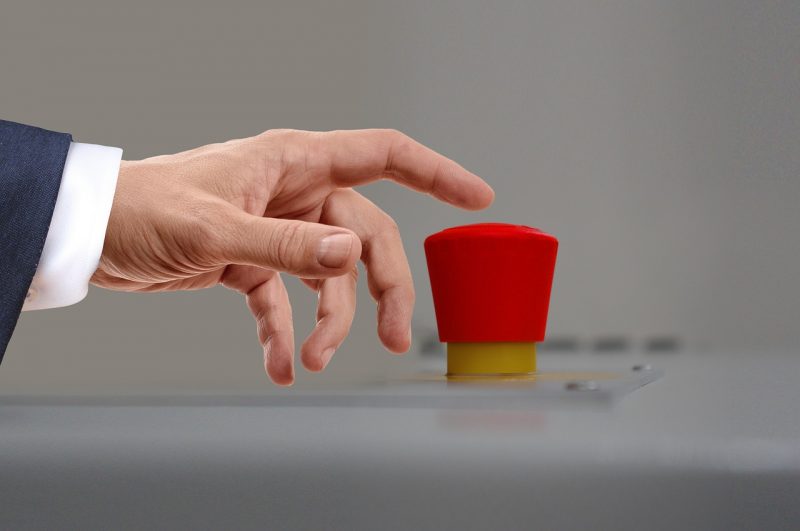 I am so horrified by what is going on in Ukraine right now.  The world desperately needs peace in Ukraine, but instead both sides are going for the throat.  The Russians and the western powers are both absolutely determined to win in Ukraine, and so now we are witnessing a very dangerous game of “chicken” that could ultimately lead to nuclear conflict.  Western leaders seem quite sure that the Russians are bluffing and that there is no possibility that they would actually use nukes if backed into a corner.  Meanwhile, Russian leaders seem to believe that there is a limit as to how far NATO powers will go to support Ukraine.  But what if both sides are wrong?

A series of miscalculations led up to this war, and another miscalculation scuttled a peace agreement that the Russians were ready to agree to back in April…

Most Americans are unaware how close Russia and Ukraine came to ending the current war in April.

Last March 27, Ukraine president Zelensky told his people “Our goal is obvious – peace and the restoration of normal life in our native state as soon as possible.”

He was hinting at what went unsaid: Ukraine and Russia, brokered by NATO member Turkey, reached a tentative fifteen-point peace plan to end the month old war.

Key points were Russia withdraw from all Ukraine except for breakaway Donbas and Crimea. Ukraine would pass on future NATO membership, pledging neutrality between Russia and NATO. Donbas and Crimea would undergo political transition based on self-determination to be recognized by both combatants. Ukraine security would be guaranteed by neighboring countries but no foreign troops would enter Ukraine.

The Biden administration and the other western powers convinced Ukraine to reject the agreement.

They wanted this war and they thought that they could win it.

For months things looked quite grim.  The Russians were steadily taking territory and the number of Ukrainian dead bodies just kept piling up.

But now the Ukrainians have suddenly found a huge source of new manpower, and they have launched a stunning counter-offensive that has successfully taken a tremendous amount of territory that the Russians had previously captured…

A Russian-installed official in the Kharkiv region said Ukrainian forces outnumbered Russian troops by 8-to-1 and had broken through to the Russian border. Vitaly Ganchev told the state-owned Rossiya-24 television channel on Monday “the situation is becoming more difficult by the hour.”

After suffering such staggering losses over the course of the war, how could the Ukrainians suddenly find enough bodies to outnumber the Russians by 8 to 1 in that area of the front?

The Rossiya-24 news channel on Monday interviewed Vitaly Ganchev, a Russian-appointed official in the Kharkiv region, who said that Russian troops in the province had been outnumbered “eight times over.” He also said, without providing evidence, that Ukrainian forces had been bolstered by “Western mercenaries”.

more and more videos of foreign fighters in the kharkov counteroffensive coming out. it seems that the reports that a significant amount of mercs were used as the tip of the spear there were mostly true pic.twitter.com/zjQMJc8sQV

From the very beginning of the war, there have always been some western fighters in Ukraine.

But now there seems to be tens of thousands of them.

Certain Russian sources have been alleging that special operations units from the U.S., the UK and other NATO powers are at the tip of the spear of this new counter-offensive.

Of course western leaders would completely deny this.

So the truth is that we don’t really know what is going on.

But what we do know is that Ukraine suddenly has large numbers of highly trained and highly competent soldiers that are giving the Russians all they can handle.

If military units from western powers have been secretly deployed in Ukraine, that would represent a massive escalation.

In response to the counter-offensive, the Russians have hit power plants all over Ukraine with cruise missiles…

A shocking new video is believed to show a massive explosion at a Ukrainian power plant after a Russian missile strike which plunged the region into darkness.

The video shows the blast at Kharkiv’s CHPP-5 power plant, which is followed by a devastating shockwave that ripples out in all directions, rattling the house the person filming is standing in.

Other videos show strikes on several power stations, which collectively shut off power to almost one third of Ukraine.

Up to this point in the war, the Russians had avoided going after critical civilian infrastructure such as power plants.

Following the attacks on Ukrainian power plants, all of a sudden Azerbaijan started shelling Armenia…

Large clashes broke out between Armenian and Azerbaijani forces along the border between the two countries on Monday night, according to Azerbaijani and Armenian Defense Ministries.

I am convinced that Azerbaijan was encouraged by the Biden administration to do this.

Russia is committed to protecting Armenia, and if this conflict were to flare up it would force the Russians to divert resources from Ukraine.

🔥🇦🇿🇦🇲Azerbaijani resources publish footage of a missile salvo on the territory of Armenia. It is not yet possible to confirm the authenticity of the video. pic.twitter.com/8awBHPnrJ7

Both sides just keep escalating matters, thinking that the other side will eventually be forced to back down.

But what if that never happens?

Numerous top U.S. politicians have publicly stated that the only acceptable end to the war is the full liberation of Ukraine.

And Russian politicians are saying similar things.  For example, Dmitry Medvedev just said that “the total surrender of the Kyiv regime on Russia’s terms” is the goal…

A former president and prime minister of Russia on Monday dismissed reports of Ukrainian gains and warned the Kremlin might ultimately demand “total surrender” of the Kyiv regime. Dmitry Medvedev, now deputy head of his nation’s Security Council, alluded to Zelenskyy’s refusal to conduct a dialogue “with those who put forward ultimatums.”

“The current ‘ultimatums’ are a warm-up for kids, a preview of demands to be made in the future,” Medvedev said. “He (Zelenskyy) knows them: the total surrender of the Kyiv regime on Russia’s terms.”

Why does it have to be this way?

Both sides are determined to go down a road that could very easily lead to nuclear war.

Why can’t both sides sit down and come up with a peace agreement that is similar to what was almost agreed to back in April?

Countless lives would be spared and it would be a tremendous boon to the global economy.

Unfortunately, such a peace agreement is not going to happen.

Both sides are now completely obsessed with victory, and so we continue to march ever closer to a cataclysmic nuclear showdown.