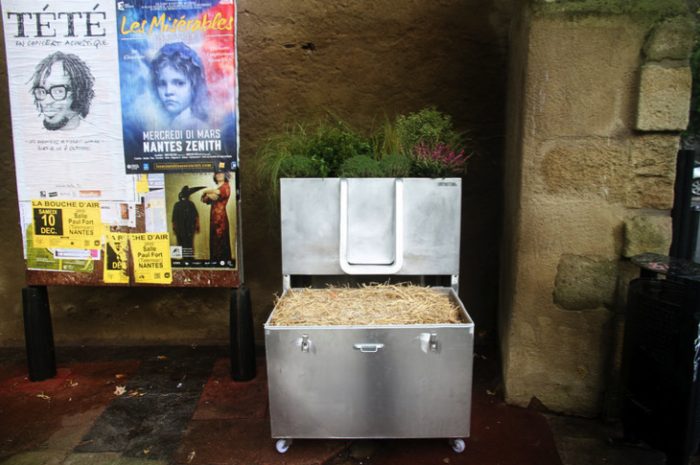 (By Brianna Acuesta of TrueActivist.com) Public urination is a problem everywhere, but no place suffers more than the metropolises around the world where millions of people walk the streets everyday. In Paris, the stench of urine often plagues tourists and residents alike on the 1,800 miles of pavement that stretch across the city, which is why they have been looking for a solution to this problem for years.

Other cities have unveiled ideas that are inspired but not quite fitting for the City of Lights, such as Amsterdam’s retractable toilets that emerge from underground and work for women, too, and San Francisco’s ‘pee paint‘ that bounces pee back at urinators.

Paris’ new urinals, called the Uritrottoir, which means “pavement urinal,” all stemmed from the discovery that hay significantly reduces the smell of pee and can even create a rich fertilizer the nitrogen from the urine combines with the carbon from the straw. This first led to the invention of a four-sided hay barrel urinal by designer Laurent Lebot and his firm, Faltazi, who then sold this urine composter to music festivals and campsites.

After realizing that this idea had the potential for great growth (literally), Lebot and fellow designer Victor Massip explored a way for this solution to benefit their city while being eco-conscious. The new urinal design features a planter on the top of it that is fertilized by the interaction between the urine and the hay below the urinal. The urinal is colored with red, graffiti-resistant paint and the first two were purchased by the Gare de Lyon train station, where they currently stand outside.

“Public urination is a huge problem in France,” Lebot said. “Beyond the terrible smell, urine degrades lamp posts and telephone poles, damages cars, pollutes the Seine and undermines everyday life of a city. Cleaning up wastes water, and detergents are damaging for the environment.”

The urinals also come with an internet-connected sensor that detect pee levels and alert maintenance workers when it’s time to change out the hay. The pair of urinals costs $9,730 and it’s estimated that the monthly fee for attendants to maintain the facilities will be $865.

It’s eco-friendly designs like this that improve health and sanitation that help to make the world a better place. It’s not only cost-effective but conscious of the toll that things like public urination have on the environment and people and these creations offer a better way to handle these issues.