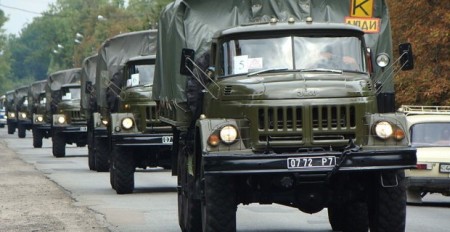 The Russian government has accused Kiev of pulling a Gleiwitz-style stunt in its claim that Ukrainian troops destroyed a “Russian military column,” alleging that Kiev staged a false flag in order to demonize Moscow.

Earlier today, Ukrainian President Petro Poroshenko announced that a “significant” number of Russian military vehicles were destroyed as they tried to cross into Ukraine last night. The allegations followed weeks of warnings and narratives in the media that Russia was preparing to invade Ukraine.

However, Russia rejected that the incident took place at all, even going so far as to assert that Kiev staged the whole episode in a bid to portray Russia as aggressors.

“No Russian military column that allegedly crossed the Russian-Ukrainian border at night or during the day ever existed,” said Major General Igor Konashenkov, a spokesman for the Russian Defense Ministry.

Konashenkov went on to say that the best case scenario was that the whole incident was a “phantom” invented by Ukraine, but he also suggested Kiev could have even killed “refugees or their own servicemen” in order to pin the blame on Moscow.

“Such statements – based on fantasies, or journalists’ assumptions, to be precise – should not be subject for a serious discussion by top officials of any country,” Konashenkov added.