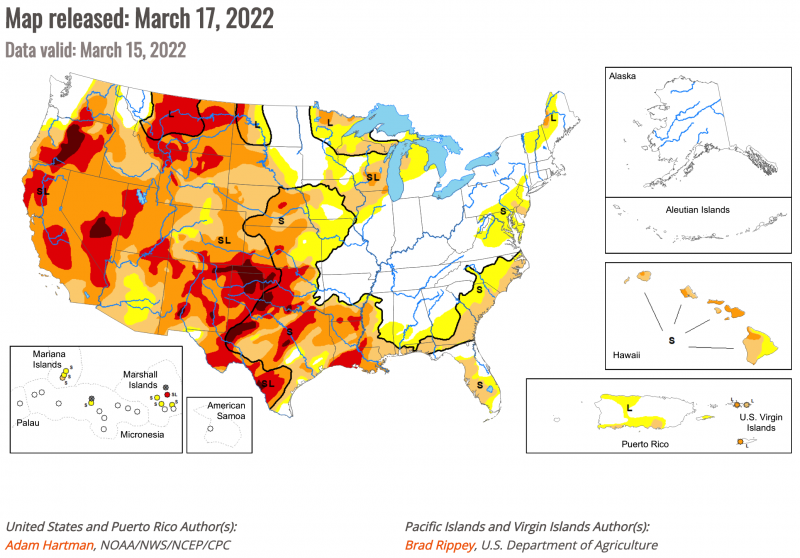 Food prices in the U.S. have already been soaring, and now we are on track for an absolutely horrible winter wheat harvest.  Of course this comes at a time when the war on the other side of the globe is going to greatly reduce wheat exports from Russia and Ukraine.  Over the last 12 months, the price of wheat has already risen 69 percent, and now this crisis threatens to go to an entirely new level.  In all my years of writing, I have never seen anything like this, and I am deeply concerned about what the months ahead will bring.

Due to extreme drought, winter wheat is in very bad shape in states such as Kansas, Oklahoma and Texas.  The following comes from one of the most prominent agricultural websites in the entire country…

Some farmers in southwestern Kansas, the top U.S. wheat producing state, have not received much measurable rain or snow since October. Winter wheat is planted in autumn, lays dormant in winter and begins sending up green shoots in spring. Proper soil moisture is critical at this stage for the crop to thrive.

More than half of Kansas was classified as under severe drought or worse as of March 8, the driest conditions since 2018, according to the National Drought Mitigation Center. Severe drought is also covering three-quarters of Oklahoma and more than two-thirds of Texas, both of which also are large wheat producers.

Farmers are praying for rain, because they desperately need it.

The coming weeks will be critical for the southern Plains wheat crop, said Lucas Haag, extension agronomist at Kansas State University. Many farmers apply fertilizer to maximize crop potential, but moisture is needed to carry nutrients to plant roots, he said.

Wheat plants damaged by the December wind storm that brought “Dust Bowl” conditions to Kansas face additional drought problems because plants have been weakened either by the sand-blast effect of blowing dust and dirt or by soil nutrient loss from the 100 mph (161 kph) winds.

How many years have I been warning that “Dust Bowl conditions” would return to the middle of the country?

Now it has happened.

Abnormally dry to exceptional drought conditions are expected to persist across 60% of the continental U.S. as spring in the Northern Hemisphere begins. Forecasters expect little to no rain for certain parts of the western U.S. through June.

From April to June, above-average temperatures are expected from Southwest to the East Coast and north through the Midwest, according to a new outlook published by the National Oceanic and Atmospheric Administration (NOAA).

NOAA’s map shows a greater than 50% chance of drought persistence for nearly 60% of the continental U.S.

We have been witnessing very strange weather patterns all over the globe in recent months, and that is one of the reasons why major agricultural commodity prices have been spiking dramatically…

Over the past year, wheat prices are up 69 percent. Among other major food exports of Russia and Ukraine, corn prices are up 36 percent and barley 82 percent.

Now war in Ukraine has created an immense “supply shock”, and this is going to have ripple effects that are felt all across the planet.

Ukraine is normally one of the key “breadbaskets” of the world, but now the invasion has changed everything…

Ukraine’s top agricultural export products are corn and wheat. Before the invasion, Ukraine was the second-largest supplier of grains for the European Union and one of the largest suppliers for emerging markets in Asia and Africa. Breaking down the numbers, Ukraine produced 49.6% of global sunflower oil, 10% of global wheat, 12.6% of global barley, and 15.3% of global maize.

Collectively, Russia and Ukraine typically account for a very large chunk of all global agricultural exports…

For the global food market, there are few worse countries to be in conflict than Russia and Ukraine. Over the past five years, they have together accounted for nearly 30 percent of the exports of the world’s wheat, 17 percent of corn, 32 percent of barley, a crucial source of animal feed, and 75 percent of sunflower seed oil, an important cooking oil in some parts of the world.

So what are we going to do now?

I haven’t found a single person that has a reasonable solution to that question.

When it comes to wheat, there are a whole bunch of countries that usually get most of their wheat from Russia and Ukraine…

Armenia, Mongolia, Kazakhstan and Eritrea have imported virtually all of their wheat from Russia and Ukraine and must find new sources. But they are competing against much larger buyers, including Turkey, Egypt, Bangladesh and Iran, which have obtained more than 60 percent of their wheat from the two warring countries.

What are they supposed to do?

Due to an unprecedented spike in the price of fertilizer, the outlook for global agricultural production was already extremely grim before the war erupted, and now we truly are staring into an abyss.

Those that have been following my articles on a regular basis already know that global hunger has been escalating rapidly over the past few years, and one UN official just admitted that this crisis is now reaching a crescendo…

“For the last three years, global rates of hunger and famine have been on the rise. With the Russian invasion, we are now facing the risk of imminent famine and starvation in more places around the world,” Fakhri said in a statement.

Read that part about “imminent famine and starvation” again.

In other words, there isn’t going to be nearly enough food for everyone.

This is exactly what we have been warned about, and we will soon see the global price of food reach heights that would have once been unimaginable.

In light of these developments, I am encouraging all of my readers to take action.

Stock up while food prices are still relatively stable, because it looks like things are about to start getting really crazy.