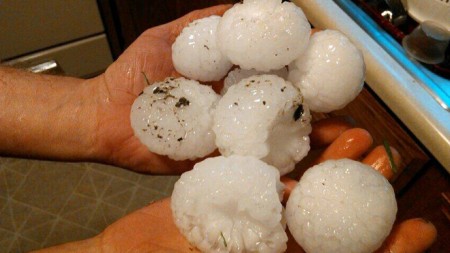 Earlier this month, a ferocious hailstorm wreaked havoc throughout the American Midwest. Several cities were badly affected, but perhaps none as much as Bray, a small town in Nebraska. The hailstones that hit Bray were unbelievably large, roughly the size of tennis balls. Naturally, the town was completely battered – the storm left it looking like a war zone with houses and vehicles almost completely destroyed.

Large chunks were ripped out of houses and the paint was torn off the walls. The cars in the town looked as though they had been through a gang war – with the windscreens and windows completely smashed in. Although tornadoes were reported in the region, the hailstones did the most of the damage, wreaking havoc among the locals. Over 20 people from Bray were injured as well; they were rushed to the emergency room, but none were seriously hurt.