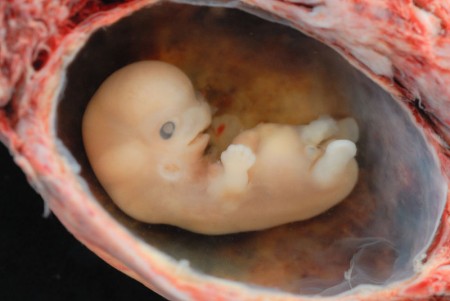 Did you know that scientists are creating cow/human hybrids, pig/human hybrids and even mouse/human hybrids?  This is happening every single day in labs all over the western world, but most people have never even heard about it.  So would you drink milk from a cow/human hybrid that produces milk that is almost identical to human breast milk?  And how would you interact with a mouse that has a brain that is almost entirely human?  These are the kinds of questions that we will have to start to address as a society as scientists create increasingly bizarre human/animal hybrids.  Thanks to dramatic advances in genetic technology, we have gotten to the point where it is literally possible for college students to create new hybrid lifeforms in their basements.   Of course our laws have not kept pace with these advances, and now that Pandora’s Box has been opened, it is going to be nearly impossible to shut it.

Scientists try to justify the creation of human/animal hybrids by telling us that it will help “cure disease” and help “end world hunger”, but what if scientists discover that combining human DNA with animal DNA can give us incredible new abilities or greatly extended lifespans?  Will humanity really have the restraint to keep from going down that road?

In my previous article entitled “Transhumanists: Superhuman Powers And Life Extension Technologies Will Allow Us To Become Like God“, I explored the obsession that transhumanists have with human enhancement.  The temptation to “take control of our own evolution” will surely be too great for many scientists to resist.  And even if some nations outlaw the complete merging of humans and animals, that does not mean that everyone else in the world will.

And once animal DNA gets into our breeding pool, how will we ever put the genie back into the bottle?  As the DNA of the human race becomes corrupted, it is easy to imagine a future where there are very few “pure humans” remaining.

Sadly, most of the scientists working in this field express very little concern for these types of considerations.