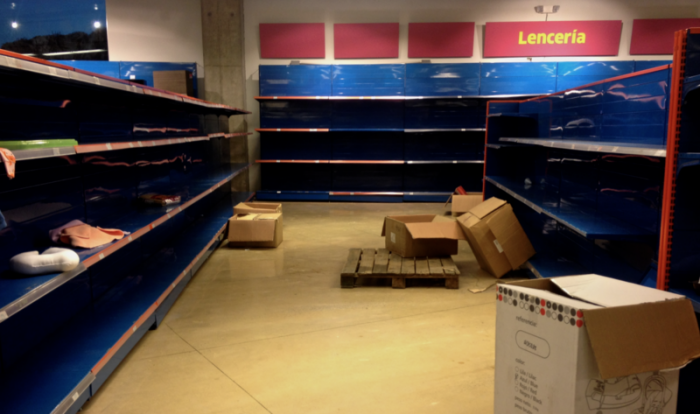 (By Daniel Lang of TheDailySheeple.com) Ever since oil prices plummeted several years ago, not a day has gone by in Venezuela that was not worse than the day before. The once oil rich socialist nation has plummeted to the depths of poverty. Their currency is worthless, government services and infrastructure are crumbling, and food shortages are ubiquitous.

The latter of those conditions has resulted in Venezuelans losing a significant amount of weight. According to a recent study conducted by the National Survey of Life Conditions (ENCOVI in Spanish), 75% of Venezuelans have lost 19 lbs of body weight over the past year.

While it’s now widely known that Venezuela has severe food shortages, the study reveals just how fast starvation conditions are escalating under the Maduro regime. When ENCOVI conducted the same study last year, they found that 11.3% of the population only ate one or two meals a day. That number has since grown to 32.5% of the population.

But just because most people are still getting three meals a day, doesn’t mean those meals are nourishing. So far 82% of the population is living in poverty and 93.3% say that they don’t have enough money to cover their food needs. There is very little meat to be had in Venezuela, and most people are surviving on bananas and potatoes.

In addition, an astonishing 65% of the families who were surveyed, said that they had children who had skipped school for food related reasons. Many of them have had to spend all day standing in line at the grocery store instead of going to school (which may be a more valuable experience for these kids, since Venezuelan schools extol the virtues of socialism at every opportunity).

With numbers like this you have to wonder, how long will it take before Venezuela loses its collective mind, and violently overthrows the Maduro government?

3 thoughts on “The Socialism Diet: 75% of Venezuelans Have Lost an Average of 19 lbs”