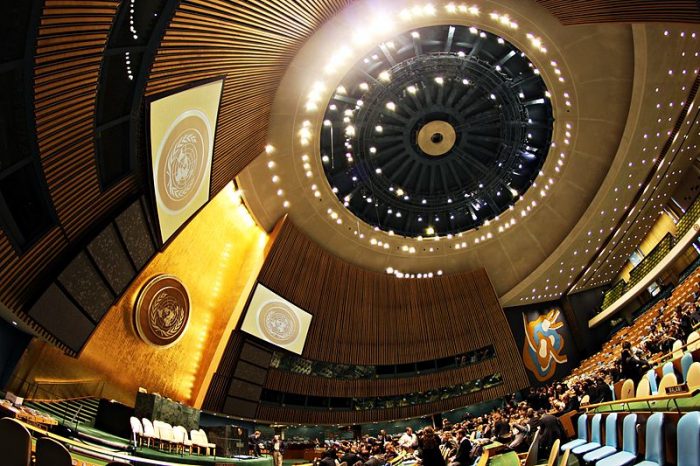 When are people going to learn that you don’t mess with Trump? Over the past several decades, the United Nations has grown into a vast bureaucratic monstrosity that is completely out of control, but previous administrations have just kept feeding the beast. Thankfully, we now have a president that is not afraid to stand up to the globalists, and the $285 million budget reduction that Trump and his team just negotiated is the largest budget reduction in UN history. Those that have not read “The Art of the Deal” yet may want to do so, because this is Trump at his best. The following is the statement that UN Ambassador Nikki Haley put out about this stunning budget reduction…

Today, the United Nations agreed on a budget for the 2018-2019 fiscal year. ‎Among a host of other successes, the United States negotiated a reduction of over $285 million off the 2016-2017 final budget. In addition to these significant cost savings, we reduced the UN’s bloated management and support functions, bolstered support for key U.S. priorities throughout the world, and instilled more discipline and accountability throughout the UN system.

“The inefficiency and overspending of the United Nations are well known. We will no longer let the generosity of the American people be taken advantage of or remain unchecked. This historic reduction in spending – in addition to many other moves toward a more efficient and accountable UN – is a big step in the right direction. While we are pleased with the results of this year’s budget negotiations, you can be sure we’ll continue to look at ways to increase the UN’s efficiency‎ while protecting our interests,” said Ambassador Haley.

What makes this deal even more interesting is the fact that it came just after the UN General Assembly voted 128 to 9 against Trump’s decision to recognize Jerusalem as the capital of Israel.

Is there a possibility that the two decisions are connected?

Even if they aren’t, the fact that the budget reduction deal happened so quickly after the anti-Israel vote sends a very strong message.

Meanwhile, what we do know is that President Trump has publicly warned the nations that voted against his recognition of Jerusalem that they could see their financial aid reduced…

U.S. President Donald Trump on Wednesday threatened to cut off financial aid to countries that vote in favor of a draft United Nations resolution calling for the United States to withdraw its decision to recognize Jerusalem as Israel’s capital.

Considering the fact that we are 20 trillion dollars in debt, we could definitely cut back on financial aid to countries that want to go against us.

And personally, I would very much be in favor of reducing funding to the United Nations a whole lot more. The UN is an anti-American institution that has been promoting the agenda of the globalists for as long as it has existed, and once I get to Washington I am going to do all that I can to help Trump put America first.

The UN needs to be defanged, declawed and made as powerless as possible, and this huge budget reduction is definitely a good first step in the right direction.

1 thought on “The UN Tried To Mess With Trump, But They Ended Up With A $285 Million Budget Reduction Instead”