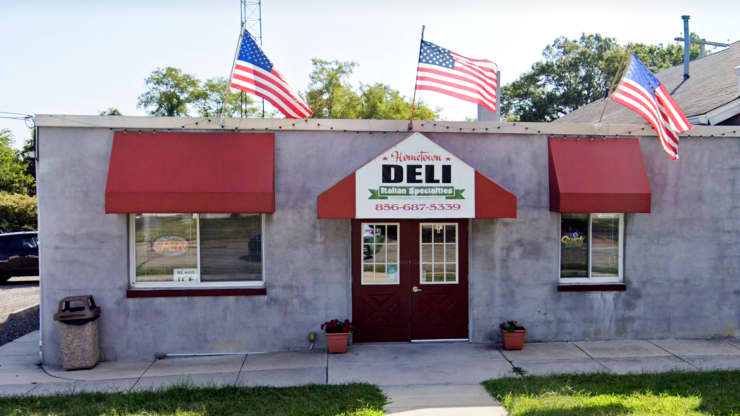 Would you pay more than 100 million dollars for a single deli in rural New Jersey that had less than $36,000 in sales during the last two years combined?  I know that sounds like a completely ridiculous question, but the stock market apparently thinks that deli is worth that much.  On Thursday, the Dow Jones Industrial Average closed above 34,000 for the first time in history, and investors all over the country cheered.  But this financial bubble is not real.  It is a giant mirage that is built on a foundation of fraud.  Investors have lost all touch with reality, and in this sort of euphoric environment a small deli in rural New Jersey can literally be valued at more than 100 million dollars…

The Paulsboro, New Jersey-based Your Hometown Deli is the sole location for Hometown International, which has an eye-popping market value despite totaling $35,748 in sales in the last two years combined, according to securities filings.

“Someone pointed us to Hometown International (HWIN), which owns a single deli in rural New Jersey … HWIN reached a market cap of $113 million on February 8. The largest shareholder is also the CEO/CFO/Treasurer and a Director, who also happens to be the wrestling coach of the high school next door to the deli. The pastrami must be amazing,” Einhorn said in a letter to clients published Thursday.

For young people getting ready to graduate from high school and go to college, don’t waste your time.

Just open up a small deli and go public.

Soon you will be a multi-millionaire.

Alternatively, you could start a fake cryptocurrency as a joke and watch it become worth billions of dollars.

To me, what is happening with “Dogecoin” is completely and utterly insane…

The digital currency Dogecoin surged by more than 85 percent so far this week in thrilling scenes for fans of the bizarre coin. Launched in 2013 and created by Jackson Palmer and Billy Markus as a joke, the cryptocurrency has never seen the highs of rival coins like bitcoin, which is currently worth $63,531.49. But a growing fanbase has helped kickstart the meme coins value, and today has seen the prices skyrocket.

Looking at it objectively, I don’t know why any rational investor would ever put one red cent into Dogecoin.

But in 2021, rational investors are being left in the dust, and those that foolishly rush in are getting filthy rich.

I know that it may be hard to believe, but at this point Dogecoin has a market cap that is greater than 22 billion dollars…

Someday Dogecoin will be worthless, but for now this “meme currency” is shocking the world.

Speaking of ridiculous valuations, Coinbase just went public, and it is currently valued at more than 85 billion dollars…

Coinbase was briefly valued at as much as $100 billion in its Nasdaq debut Wednesday, a landmark event for the cryptocurrency industry. The stock closed at $328.28 per share, valuing Coinbase at $85.8 billion on a fully diluted basis.

Don’t you wish that you would have been the one to launch Coinbase?

Of course all of these absurd valuations are just temporary.

This bubble will inevitably pop, and those that did not sell at the top of the market will be kicking themselves.

In the financial markets, enormous fortunes are being won and lost all the time, but none of this is real.

What is real are the riots that are happening in our streets on a nightly basis.  Last night, rioters “waved a pig’s head” at police officers in Minnesota…

Demonstrators came out for the fourth night in a row since Wright, 20, was fatally shot by police officer Kim Potter during a traffic stop on Sunday.

Sadly, instead of trying to calm the violence BLM leaders are actually arguing that rioting and looting are legitimate forms of political expression…

A prominent activist who supports the Black Lives Matter movement has appeared to support violent protests, arguing that rioting and looting are ‘a legitimate, politically-informed response to state violence’.

Bree Newsome, 35, made the passionate remarks in a series of tweets this week, arguing that police are not limited to non-violence, and that a violent response to injustice can be appropriate and justified.

And do you want to know what else is real?

As I discussed a couple days ago, social decay is transforming city streets all over America into drug-infested wastelands…

Homeless men lie on the sidewalk while others wearing blankets and rags loiter on a street strewn with garbage, feces, and drug paraphernalia along the notorious Kensington Avenue drag in Philadelphia.

Video posted online on March 10 shows people living out of suitcases on the sidewalks in the area adjacent to the entrance to the Somerset train station along the Market-Frankford train line while others openly brandish needles.

Cardboard boxes with trash bags stacked on top of them lie feet away from the entrances to various pawn shops, check-cashing stores, delis, and bodegas.

The financial bubble that we are experiencing right now will go away, but the problems on our streets are not going away.

In fact, they are only going to get worse in the months and years ahead.

But if you don’t want to believe this, go ahead and pour your life savings into Hometown International or Dogecoin and see what happens.

You only make money in the markets if you get out in time, and time is quickly running out for those that have put their faith in this financial bubble.