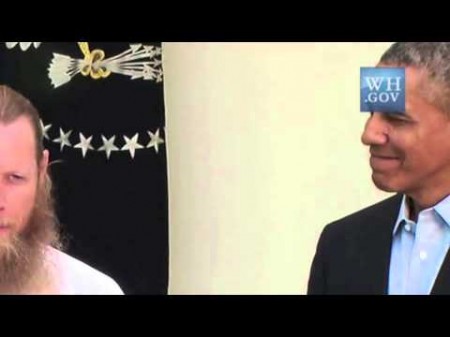 When Bob Bergdahl launched in Arabic, invoking Allah while standing next to President Obama in the White House Rose Garden, a number of Americans were startled. Claire Lopez, a former CIA operations officer, a strategic policy and intelligence expert with a focus on Middle East, national defense, WMD, and counterterrorism issues, emailed her friend Allen West:

“What none of these media is reporting is that the father’s (SGT Bowe Bergdahl’s father Bob) first words at the WH were in Arabic – those words were “bism allah alrahman alraheem” – which means “in the name of Allah the most gracious and most merciful” – these are the opening words of every chapter of the Qur’an except one (the chapter of the sword – the 9th) – by uttering these words on the grounds of the WH, Bergdahl (the father) sanctified the WH and claimed it for Islam. There is no question but POTUS knows this.”