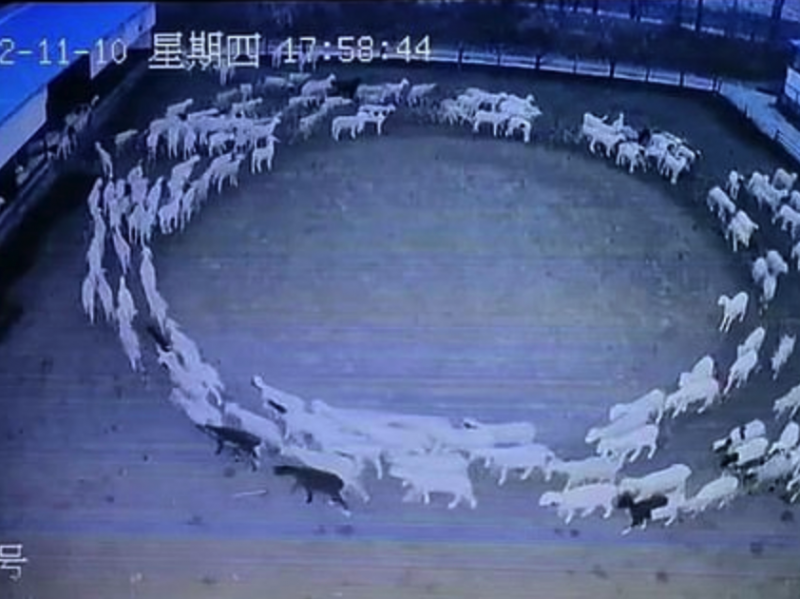 By now, you have probably heard of a very strange phenomenon that has been taking the Internet by storm in recent days.  Large groups of animals, insects and birds have been spotted walking in circles all over the planet, and there is lots of speculation about why this is happening.  Some of the potential explanations that have been suggested are blaming this strange behavior on disease, changes in the magnetic field of the Earth, spoiled feed, parasitic brain worms, experiments at CERN, a coming pole shift or spikes in electromagnetic radiation.  Personally, I don’t know what to think.  Something really weird does seem to be happening, and hopefully we will get some more answers in the coming days.

In early November, a group of sheep in northern China began walking in circles over and over again.

This went on for nearly two weeks, and footage of this behavior has spread very rapidly on various social media platforms…

Bizarre video footage captured on a Chinese farm shows a group of sheep walking in circles for almost two weeks without stopping. The strange behavior has observers—and the sheep’s owner—utterly perplexed as they try to determine what’s behind it. The footage was taken earlier this month in northern China.

A closed-circuit camera on a local farm caught hundreds of sheep walking in a clockwise motion inside their pen. Not all of the animals joined in at first, watching the action from the center of the flock before falling in line with the rest of the herd.

Even our large corporate media outlets have been talking about the sheep in China, but in many cases they have decided that it is something to laugh about.

Hopefully there is a very simple explanation for why the sheep were circling for such a long period of time.

According to one expert that was interviewed by Newsweek, this could simply be a case where the sheep became extremely frustrated because they were penned up for so long…

A potential explanation has been shared by Matt Bell, a professor and director at the Department of Agriculture at Hartpury University, in Gloucester, England.

“It looks like the sheep are in the pen for long periods, and this might lead to stereotypic behavior, with the repeated circling due to frustration about being in the pen and limited [as to where they can go]. This is not good. Then the other sheep join as they are flock animals and bond or join their friends,” Bell told Newsweek.

But why are so many other animals, insects and birds also walking in circles all over the planet?

What we are witnessing is not just limited to one group of sheep in northern China.

This appears to be something that is happening all over the world, and so we need an explanation that can account for that.

A viral disease has turned pigeons in the UK into zombie-like creatures – causing them to develop twisted necks and walk around in circles, animal experts said.

This disease is known as “pigeon paramyxovirus”, and we are being told that it “can affect pigeons, doves and poultry”…

“There has been an increase in the number of grounded pigeons coming into the JSPCA Animals’ Shelter in the last few weeks, many of which have been showing neurological signs such as twisted neck, circling or are unable to stand,” said the animal rescue service based in St. Helier, Jersey.

It said the disease appears to be pigeon paramyxovirus, which is described as “an invariably fatal viral disease that can affect pigeons, doves and poultry.”

So this may be an explanation for why a lot of birds have been walking around in circles, but it would not explain why so many sheep, chickens and insects have been affected.

What we need is a theory that can account for everything that we have been witnessing.

Below, I have shared a number of videos that supposedly document this phenomenon.  As you can see, there certainly appears to be a lot of footage out there…

Prepare something is coming 👌 pic.twitter.com/h0CXf35UGe

I’m going to post a few videos below abd what movie this reminds me of . pic.twitter.com/8bH01RLIdS

More and more
Do you ready its coming 👌 pic.twitter.com/Mj3LQp7CjG

I really wish that I could tell you why this is happening.

Perhaps all of this is much ado about nothing.

Let’s watch and see if this unexplained behavior continues.

Without a doubt, we live in very weird times, and I believe that they will soon get a whole lot weirder.

Truth is stranger than fiction, and I believe that we will see things happen in the years ahead that will go way beyond anything that any of our science fiction authors ever dreamed up.

So if you think that things are crazy now, just wait, because it won’t be too long before events on this planet start getting really bizarre.