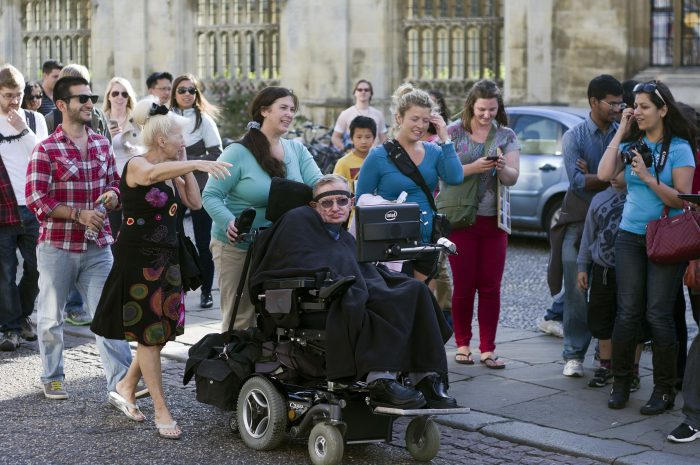 Stephen Hawking is widely regarded to be one of the greatest minds of our time, but what he has to say in his final book has many questioning whether he really deserves such praise. Hawking passed away back in March at the age of 76, but his final book entitled “Brief Answers to the Big Questions” was completed with help from his family and was released on Tuesday. One would have expected Hawking to include comprehensive scientific evidence for the conclusions that he reaches in his book, but that isn’t the case. Instead, Hawking reveals that he was simply just like everyone else. In this life, most people choose to believe what they want to believe, and that was definitely the case with Hawking.

For example, in his new book Hawking states that there “is no God”.

But instead of proving his point, he simply explains that he prefers “to think that everything can be explained another way”…

“There is no God. No one directs the universe,” he writes in “Brief Answers to the Big Questions.”

“For centuries, it was believed that disabled people like me were living under a curse that was inflicted by God,” he adds. “I prefer to think that everything can be explained another way, by the laws of nature.”

By his own admission, Hawking’s preference is to believe that there is no God, and he has the right to make that choice.

However, he is doing his readers a tremendous disservice by framing this as some sort of scientific conclusion when he has presented no factual evidence at all.

In his new book, Hawking also tells us that there is no afterlife…

“No one created the universe and no one directs our fate.

“This leads me to a profound realisation: there is probably no heaven and afterlife either.

“I think belief in the afterlife is just wishful thinking.

“There is no reliable evidence for it, and it flies in the face of everything we know in science. I think that when we die we return to dust.”

Now that he is gone, I wonder what Hawking would tell us if he was able to come back…

But even though Hawking did not believe in God or an afterlife, he did believe in the existence of aliens…

“There are forms of intelligent life out there,” he writes. “We need to be wary of answering back until we have developed a bit further.”

And he also believed that time travel might be possible…

“Travel back in time can’t be ruled out according to our present understanding,” he says. He also predicts that “within the next hundred years we will be able to travel to anywhere in the Solar System.”

On top of all that, in his “final prediction” Hawking postulated that a new species of “superhumans” would soon take over society and “destroy the rest of humanity”…

In his final prediction, one of the world’s most celebrated scientists suggests that genetic engineering was likely to create a new species of superhuman that could destroy the rest of humanity.

In the end, it is very clear that Hawking’s view of the world was largely a combination of wishful thinking and an overactive imagination.

He believed what he wanted to believe, and in his new book he also expressed his opinion that humanity would need to leave this planet if it is going to survive…

In the long run, Professor Hawking urged humans to cast a wide net throughout space and successfully settle as many new worlds as possible.

Doing so will ensure the survival of the human race even if its demise is accelerated by its own hands.

He said: “I am convinced that humans need to leave Earth. If we stay, we risk being annihilated.”

The clock is definitely ticking for humanity, but there is nowhere else for us to go.

Ultimately humanity’s fate will be determined here, and we should be seeking God’s help and guidance.

But instead, Hawking and other global leaders have completely rejected God, and that rejection has very serious consequences.