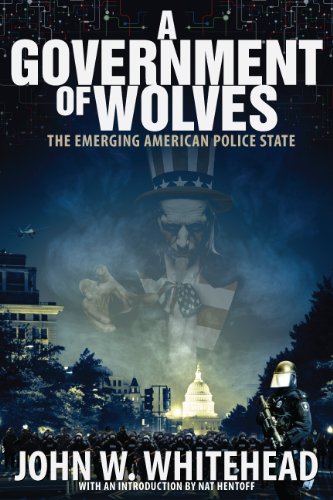 For those of us who have managed to survive 2014 with our lives intact and our freedoms hanging by a thread, it has been a year of crackdowns, clampdowns, shutdowns, showdowns, shootdowns, standdowns, knockdowns, putdowns, breakdowns, lockdowns, takedowns, slowdowns, meltdowns, and never-ending letdowns.

We’ve been held up, stripped down, faked out, photographed, frisked, fracked, hacked, tracked, cracked, intercepted, accessed, spied on, zapped, mapped, searched, shot at, tasered, tortured, tackled, trussed up, tricked, lied to, labeled, libeled, leered at, shoved aside, saddled with debt not of our own making, sold a bill of goods about national security, tuned out by those representing us, tossed aside, and taken to the cleaners.

As I point out in my book A Government of Wolves: The Emerging American Police State, we’ve had our freedoms turned inside out, our democratic structure flipped upside down, and our house of cards left in a shambles.

We’ve had our children burned by flashbang grenades, our dogs shot, and our old folks hospitalized after “accidental” encounters with marauding SWAT teams. We’ve been told that as citizens we have no rights within 100 miles of our own border, now considered “Constitution-free zones.” We’ve had our faces filed in government databases, our biometrics crosschecked against criminal databanks, and our consumerist tendencies catalogued for future marketing overtures.

We’ve been given the runaround on government wrongdoing, starting with President Obama’s claim that the National Security Agency has never abused its power to spy on Americans’ phone calls and emails. All the while, the NSA has been racing to build a supercomputer that could break through “every kind of encryption used to protect banking, medical, business and government records around the world.” Despite the fact that the NSA’s domestic surveillance program has been shown to be ineffective at preventing acts of terrorism, the agency continues to vacuum up almost 200 million text messages a day.