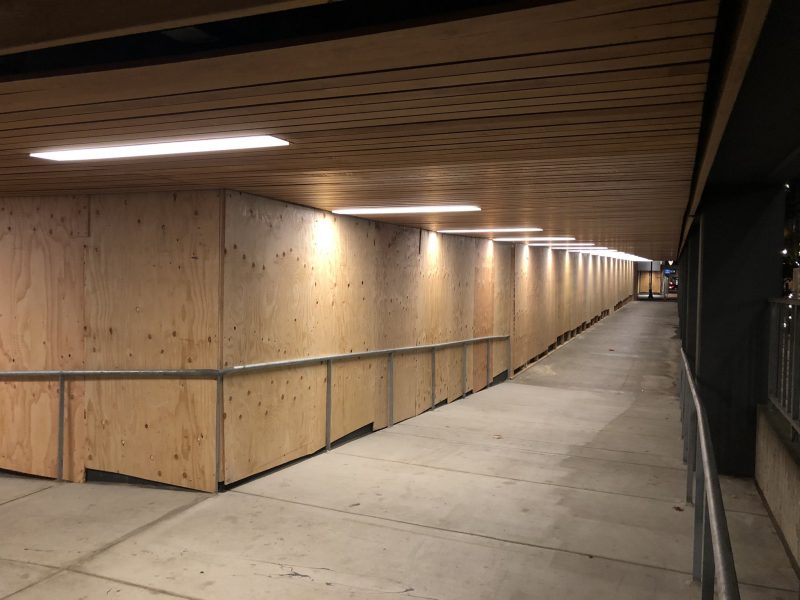 A storm is coming in, and soon it will envelop the entire nation.  We are accustomed to seeing businesses board up their doors and windows in coastal cities that are about to get hit by a hurricane, but I can’t think of another time when businesses all across America have been boarding up their doors and windows all at the same time.  There is widespread fear that this election could be the spark that sets off another round of horrifying civil unrest in cities all over the United States, and business owners are taking measures to protect their businesses from the violence.  The fact that we are even talking about the possibility of widespread violence after a presidential election shows just how much our country has fallen already.  Our society is literally coming apart at the seams all around us, and at this point even Forbes is urging everyone to prepare for a worst case scenario…

If we don’t have a clear winner, things could get ugly. Since we’ve witnessed months of mayhem, riots and civil unrest in large U.S. cities, it’s reasonable to conclude that we’ll have a frightening level of violence, destruction and unrest after the election. Both sides may claim victory, which could lead to actions that we don’t want to even consider, as it would rip apart the country.

That paragraph was not pulled from some ridiculous tabloid.  This is Forbes that we are talking about, and it is crazy that even they are warning that there could be “a frightening level of violence, destruction and unrest after the election”.

How in the world is it possible that we have sunk so low?

Violence is not going to solve anything.  It boggles my mind that so many Americans would be willing to engage in senseless violence, and we should all be grieved by what has been happening in the streets of Philadelphia over the past few nights.

Many desperate business owners are extremely concerned that their businesses could be vandalized and looted in the aftermath of the upcoming election, and they have been boarding up their storefronts to try to prevent that from happening.  For example, here is what has been happening in downtown Washington…

Large swaths of downtown Washington, within blocks of the White House, resembled a coastal community girding for a powerful hurricane. Hotels, office buildings, coffee shops and restaurants were sheathed in plywood, with some of the makeshift barriers stretching nearly entire blocks.

Restaurants and luxury retailers are operating through windows covered in plywood or other barriers, and shoppers pass through entryway cut-outs. City officials have been holding workshops in recent months to prepare for possible civil unrest after Election Day.

If I owned a business in a core urban area, I would undoubtedly be doing the exact same thing.

When things get crazy, the looters are going to follow the path of least resistance, and they are going to prey on easy targets.

Just look at what looters just did to a Walmart in Philadelphia.  Watching that footage should chill you to the core.

On Thursday, we learned that Walmart has decided to pull all guns and ammunition from the sales floors of all their stores nationwide due to concerns that the upcoming election could spark even more civil unrest…

“We have seen some isolated civil unrest and as we have done on several occasions over the last few years, we have moved our firearms and ammunition off the sales floor as a precaution,” Walmart said in a statement.

There is still a small chance that there could be some sort of a landslide that would bring a quick end to the presidential race, but that does not seem likely.

Instead, it appears that the election results could be bitterly contested, and law enforcement authorities in some states are preparing for the worst.

For instance, Texas Governor Greg Abbott has announced that he will be deploying National Guard troops to cities all over Texas prior to Election Day…

In Texas, National Guard troops are expected to be sent to Austin, Dallas, Fort Worth, Houston and San Antonio before Election Day. During a Wednesday news conference, Texas Governor Greg Abbott said during a Wednesday event that the Texas National Guard were being deployed “in the event that there are any protests after the elections are concluded, that we will have adequate personnel in place to make sure that we will be able to address any protest that could turn into riots.” Abbott declined to reveal the number of troops being sent throughout the state.

I wish that more governors were taking similar steps, but a lot of politicians in blue states don’t seem particularly eager to crack down on rioters, and that is extremely unfortunate.

Because the truth is that most Americans can see what is coming and they are extremely concerned about what may happen.  According to one recent survey, three out of every four voters is “worried about possible violence”…

Across the country, Americans are increasingly worried about the possibility of violence over the high-stakes presidential election, which analysts say could be marred in chaos as an anxious country waits days or weeks for the results. Three of 4 voters say they’re worried about possible violence, while only 1 in 4 say they’re “very confident” the country will see a peaceful transfer of power if Democratic presidential candidate Joe Biden defeats President Donald Trump, a new USA TODAY/Suffolk University poll finds.

Personally, I am still hoping that a way can be found to minimize the unrest and that we can get through this election with as little violence as possible.

But sticking our heads in the sand isn’t going to do any good.  There have been endless riots since the tragic death of George Floyd earlier this year, and this election has the potential to spark chaos that is unlike anything that we have seen so far.

Hopefully the votes will be counted as quickly as possible and the vast majority of Americans will be willing to peacefully accept the results.

But the closer that we get to Election Day the less likely that outcome appears to be, and at this point many of us are bracing for the worst.