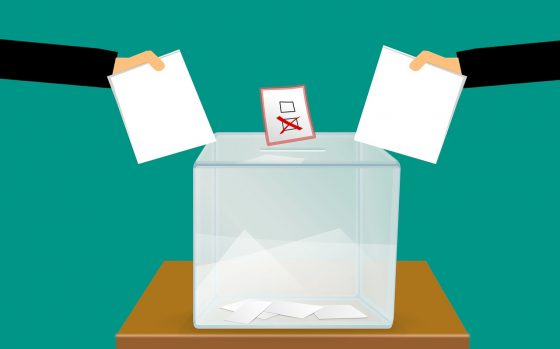 Would you be willing to wait more than 9 hours to cast a vote on the very first day of early voting?  As you will see below, that is precisely what just happened in Georgia.  We have become accustomed to seeing long lines to vote on Election Day, but in 2020 we are witnessing colossal lines to vote three weeks before the election.  And this is happening even though tens of millions of Americans will be casting their votes through the mail this year.  The numbers that I am going to share with you in this article are eye-popping, and they seem to indicate that there is an unprecedented amount of interest in this election.  In recent months there has been a tremendous nationwide effort to encourage people to vote in 2020, and it appears that it is working.

A professor at the University of Florida named Michael McDonald is compiling voting data from all 50 states, and his numbers show that more than 11.9 million Americans have voted so far in 2020.

Of course one of the big reasons why so many Americans have voted already is because voting by mail has been aggressively pushed all over the nation this time around.

According to Professor McDonald, a whopping 76,183,844 mail ballots have been requested by voters up to this point.  Most of those ballots have not been returned yet, but it is probably safe to assume that most of them eventually will be sent in.

In the end, we could potentially have 50 or 60 million Americans vote by mail, and that is an absolutely staggering number.

To put this in perspective, back in 2016 President Trump received 62 million votes.  So for there to be more than 76 million mail ballots floating around out there right now is almost unimaginable.

But even though so many of us will be voting by mail, it certainly has not dampened the enthusiasm for in-person early voting around the nation.  When early voting opened in Georgia on Monday, the lines were unlike anything that we have ever seen before.  According to CNBC, people were waiting in line for “as long as 9 hours and 39 minutes”…

NBC News reported on Monday that waits at Georgia voting sites lasted as long as 9 hours and 39 minutes. Counties in the state with large non-White populations in particular reported long lines, supporting research that shows race is a key indicator in how long a voter waits in line at a polling station.

Would you wait in line that long to cast your vote?

If it was me, I think that I would have just come back another day.

But this is how passionate people are about this election.  According to the Secretary of State, an all-time record 126,876 votes were cast early in Georgia on Monday alone…

The Secretary of State’s Office confirmed to Channel 2 Action News that Georgia has broken the record for the amount of people voting in person on the first day of early voting.

According to the Secretary of State’s Office, 126,876 Georgians voted on Monday. The previous record was about 90,000 voters.

If you can believe it, some Georgia voters were still waiting in line at 10 PM to cast their votes.

Officials in Harris County, Texas’ most populous county, on Tuesday afternoon reported a record high first day of early voting with 68,000 ballots cast. And that was with five hours of voting still to go.

Many political operatives on the left believe that the fact that so many people are voting early is a good sign for their candidates, but we will have to wait and see if that actually turns out to be true.

So keep that in mind as we discuss the following numbers.

Some states report the party affiliation of voters that return their ballots by mail, and Professor McDonald has been constantly updating that data on his website.  The following are the latest figures that we have for the key swing states of Florida, North Carolina, Iowa and Pennsylvania…

Once again, I want to emphasize the fact that it was always expected that Democrats would vote by mail in far greater numbers than Republicans.

But the fact that Democrats have such a massive lead in returned ballots in the critical swing state of Pennsylvania has got to be causing concern among Republican officials.

The good news for Republicans is that everyone is expecting the GOP to have an overwhelming turnout on Election Day itself.  Throughout this election cycle President Trump has been critical of voting by mail, and so this is going to encourage the vast majority of his hardcore supporters to show up in person to vote.

And when you vote in person, there is much less of a chance that your ballot will end up in a dumpster somewhere.

The votes that are actually cast on Election Day will be counted very rapidly like they normally are, and those votes should skew very heavily toward President Trump.

The votes that are sent in by mail will take longer to fully count, and Democrats will be counting on those votes to swing the presidential race to Biden if Trump initially has a lead.

But without a doubt it will not look good if one candidate has a substantial lead on election night but another candidate ends up winning once all of the votes are finally counted.

Having multiple ways to vote may be more “convenient”, but it also opens up a door for all sorts of potential problems, and I have a feeling that quite a few things are going to go wrong this November.