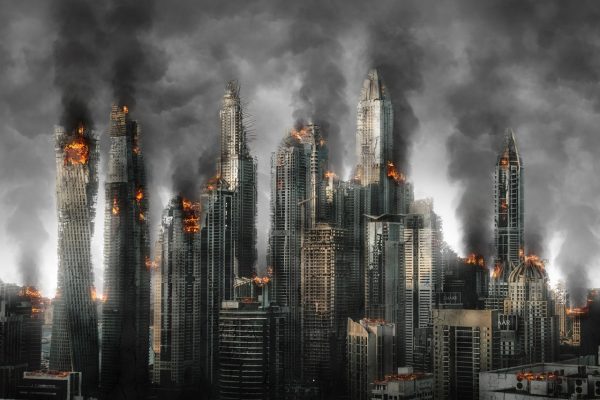 As I have been repeatedly documenting, people have not been receiving dreams and visions about the coming judgment on America for just a few years.  This is literally something that has been happening for decades, and it has been happening all over the globe.

Today, I want to share with you a miracle testimony and a vision from 1988 that were recently sent to me by a friend named Rex Mitchell in Australia.  As you can see, what he was shown more than 30 years ago is perfectly consistent with what so many others have been shown…

I’ve just read Sonja Craighead’s prophetic vision “America Will Burn.” I believe it is very timely. And I can relate to that vision.
In December 1988, my wife and I were holidaying on Phillip Island, in south eastern Australia, when I suffered excruciating pain in the lower part of my stomach. We prayed about it, but when the pain didn’t abate, she rushed me to Wonthaggi Hospital. They admitted me to a ward with about 20 other beds, and they took a series of 19 x-rays to find the cause of the pain. However, they found nothing. Therefore, the surgeon said, “If you’re no better tomorrow, I’ll have to go in with the knife.” That night, I was in so much pain, the doctor pulled a curtain around my bed and sent my wife and children home.

During the night, on a trip to the toilet, I felt the devil withstanding me to my face, and he said, “You’ll never see your wife and children alive again.” So, I called upon the Lord, and said, “Lord, if you will heal me of this illness, I will go anywhere in the world to preach the gospel for you.” In the Spirit, he told me, “Go to your bedside table, and in the top draw you will find a Bible, open it up and you find the answer to your prayer.” I did as he commanded, and there in the top drawer was a small Gideon’s New Testament, Psalms and Proverbs Bible. I opened it at random, and it fell open at Psalm 66, and I read these last four verses:

“I cried unto him with my mouth, and he was extolled with my tongue. 18If I regard iniquity in my heart, the Lord will not hear me: 19But verily God hath HEARD me; he hath attended to the VOICE of MY PRAYER. 20Blessed be God, which hath not turned away my prayer, nor his MERCY from me.”  Psalm 66:17-20

Instantly, the pain left me and I was healed. Praise God! Then God said to me, “Pack your bags, I’m sending you to America to preach the gospel.”

In the morning, I had a vision of the United States, and I saw lost souls everywhere, aimlessly walking the streets. Then I saw cities, including New York City, ablaze from what I perceived to be bombs. And I thought, “Lord, if this is the future of America, why are you sending our family there?” But, faithful to his command, we migrated: returning on his direction 12 years later.

We spent many years in the Nashville area, and the Lord used us to teach the saved and reach the lost, via syndicated radio programs. I have included three examples of one series of 106 short programs we produced called A PAGE IN HISTORY. May you Meranda enjoy them if you have the time to listen.

While in the U.S., we came across prophecies of America’s future judgment, from A.A. Allen, Dimitru Duderman, Henry Gruver and others, confirming what the Lord had shown me. I would be delighted if it were not so, but judgment is coming for man’s wickedness and rebellion against his Almighty Creator. And no nation on earth will be spared. We all must be “prepared” both spiritually and physically—as you have exhorted us Michael.
May God bless you, Meranda and your family, and keep you all safe and well until Jesus comes. This is indeed the generation that will see his triumphant return. I hope to see you in his glorious Kingdom here on earth.
Meanwhile, may God mightily bless everything you do.
Regards,
Rex