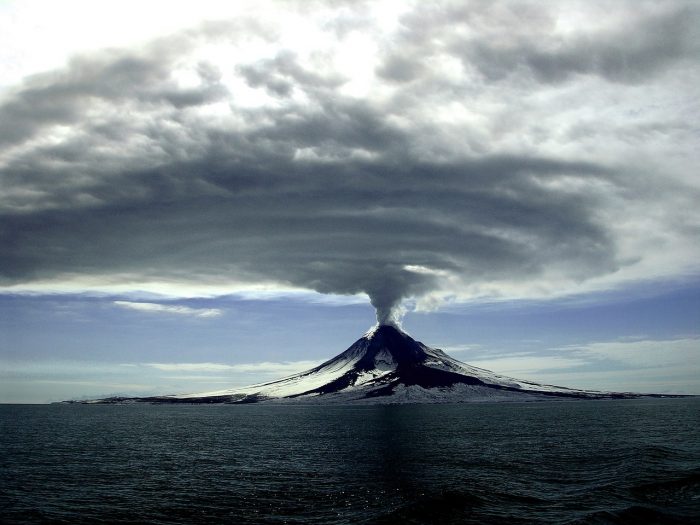 Massive eruptions of Hawaii’s Kilauea volcano and Guatemala’s Fuego volcano have captivated the entire world in recent days, and now it looks like even more volcanoes are starting to wake up. In fact, yellow alerts were just issued for Mexico’s Mt. Popocatepetl and Alaska’s Great Sitkin volcano. Mt. Popocatepetl and Great Sitkin both sit along the “Ring of Fire” that roughly encircles the perimeter of the Pacific Ocean, and many are becoming concerned that we may be witnessing some sort of “chain reaction” as volcanoes all over the globe begin to exhibit signs of increased activity. This even includes some unusual happenings at Yellowstone, and we will cover that near the end of this article. But to start with, let’s take a look at the yellow alert that was just issued for Mt. Popocatepetl. The following comes from a government website in Mexico…

In the last 24 hours, through the monitoring systems at Popocatépetl volcano, were registered 30 exhalations with emissions of steam and gas (image 1). At night was possible to observed incandescence that increase with some exhalations (image 2).

At the time of this report the emission are dispersed to the south-southwest direction (image 3).

CENAPRED emphasizes that people SHOULD NOT go near the volcano, especially near the crater, due to the hazard caused by ballistic fragments (image 4) and in case of heavy rains leave the bottoms of ravines by the danger of landslides and debris flows.

The scenarios foreseen for this phase are:

2. Ash fall in nearby towns.

Any signs of activity at Mt. Popocatepetl should always be taken very, very seriously.

It is known as the most dangerous volcano in North America for a reason. Experts tell us that centuries ago this volcano actually “covered entire Aztec cities” with super-heated mud…

So let us pray that we don’t see a major eruption there any time soon.

Meanwhile, a yellow alert has also been issued for Alaska’s Great Sitkin volcano. The following comes from the Alaska Volcano Observatory…

Volcanic Activity Summary: Earthquake activity at Great Sitkin Volcano has been elevated over the past five days, and earlier today at 11:39 AKDT (19:39 UTC), a signal that may represent a short-lived steam explosion was detected by seismic data. AVO is thus raising the Aviation Color Code and Alert Level to YELLOW/ADVISORY.

Great Sitkin Volcano is monitored by a five-station seismic network on Great Sitkin Island and with additional seismic stations on the nearby islands of Igitkin, Adak, Kagalaska, and Kanaga. A six-element infrasound array to detect explosions (atmospheric pressure waves) was installed on Adak Island in June, 2017, although it is currently (June 2018) only partly operational. AVO also uses satellite imagery to monitor Great Sitkin Volcano.

Remarks: Great Sitkin Volcano is a basaltic andesite volcano that occupies most of the northern half of Great Sitkin Island, a member of the Andreanof Islands group in the central Aleutian Islands. It is located 43 km (26 miles) east of the community of Adak. Great Sitkin erupted at least three times in the 20th century, most recently in 1974. That eruption produced at least one ash cloud that likely exceeded an altitude of 25,000 ft above sea level. A poorly documented eruption occurred in 1945, also producing a lava dome that was partially destroyed in the 1974 eruption. A seismic swarm occurred from July 2016 through the end of 2017.

Unlike Mt. Popocatepetl, Great Sitkin is located very far away from any large population centers, and so even a full-blown eruption of that volcano would not be that catastrophic.

Of course the same cannot be said about Yellowstone. As I have written about many times, a full-blown eruption at Yellowstone could potentially change all of our lives in a single moment. That is why the unusual activity that is happening there right now is such a concern…

Yellowstone’s Steamboat Geyser, the largest in the world, has now erupted eight times in less than three months, in a geological puzzle that has fascinated scientists working at the site.

The most recent Steamboat eruption occurred Monday just after 9 a.m. “It was unbelievable,” Jamie Farrell, a geologist at the University of Utah who happened to be at the geyser during the eruption, told Newsweek. He’s seen plenty of other geysers go off—but not Steamboat, which is capable of the largest eruptions of all currently active geysers.

Eruptions of Steamboat do not happen that often. As Mac Slavo has noted, the last one was in September 2014…

Until this recent series of eruptions, the last time Steamboat blew was in September 2014. Steamboat’s latest eruption was Monday morning when the geyser shot boiling hot water hundreds of feet into the air. Steam billowed from the geyser for hours longer. Steamboat is located in the Norris Geyser Basin, known to have the hottest and most changeable thermal area in nearly 3,500-square-mile wilderness park that sits on a volcanic hot spot called a caldera. That accounts for the geyser’s towering columns of steam (it’s very, very hot underground) but leaves a major fear-provoking question unanswered: Why now, and is it a sign the giant volcano is waking up?

We better hope that Yellowstone is not awakening. In a previous article, I described what a full-blown eruption of Yellowstone might look like…

Throughout human history, great societies have been taken down by natural disasters, and despite all of our advanced technology we are extremely vulnerable as well.

So the fact that our planet is becoming increasingly unstable is a major concern, and I believe that this is going to have major implications for our future.