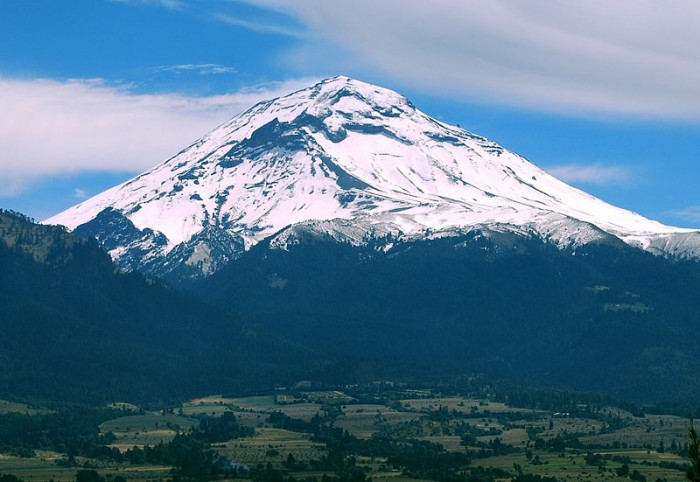 More than 25 million people live in the vicinity of North America’s 2nd-highest volcano, and in recent weeks this volcano has been steadily rumbling and has been spewing out massive amounts of black smoke and ash. I have previously written about “the most dangerous mountain in the United States” (Mt. Rainier), but if the volcano that I am talking about today experiences a full-blown explosive eruption it could potentially be a cataclysmic event beyond what most of us would dare to imagine. Popocatepetl is an Aztec word that means “smoking mountain”, and it is also the name of a giant volcano that sits approximately 50 miles away from Mexico City’s 18 million residents. “Popo”, as it is called by locals, was dormant for much of the 20th century, but it came back to life in 1994. And now all of this unusual activity in recent weeks has many wondering if a major eruption may be imminent.

As most of you already know, Mexico sits on the “Ring of Fire” that stretches along the outer rim of the Pacific Ocean. Over the past couple of years seismic activity throughout this area has started to really heat up, and according to Volcano Discovery there are dozens of volcanoes associated with the Ring of Fire that have recently erupted.

That is why so many people are alarmed about the very unusual activity that we began to see from Popocatepetl starting in mid-September. The following is from a report that was posted on September 23rd…

In recent days, the activity at Popocatepetl seems to be getting stronger and more intense. This next excerpt is from an article the Telegraph posted on October 21st…

Mexico’s Popocatepetl volcano put on a spectacular display as it spewed out huge clouds of ash in to the sky.

The volcano, which is 50 miles south east of Mexico City spat ash and smoke 2500 metres above the volcano’s crater.

Mexico’s volcano experts says the volcano had around 40 exhalations with a series a of rumblings in the past three months.

And just over the weekend there was even more activity. This is what the BBC reported on October 30th…

Mexico’s Popocatepetl volcano has erupted spewing ash and black smoke into the sky.

The volcano is located 50 miles (80 km) southeast of the capital, Mexico City.

Could all of this be the build up to a major event of some sort?

As I mentioned above, 18 million people live in Mexico City. And we do know that ash from Popocatepetl can reach Mexico City. In fact, this actually happened on a small scale back in 2013…

The Popocatepetl volcano just east of Mexico City has spit out a cloud of ash and vapor 2 miles (3 kilometers) high over several days of eruptions, and Mexico City residents awoke Saturday to find a fine layer of volcanic dust on their cars.

Mexico City is not in a particularly safe location. In addition to Popocatepetl, the city also sits in an area that is prone to experiencing earthquakes. One of these days we could see an event that could destroy much or all of Mexico City, and if that happened the entire economy of Mexico would immediately collapse and millions of refugees would start streaming north.

So ultimately Popocatepetl is not just a Mexican problem. If a major eruption took place, it would quickly become a U.S. problem too.

Speaking of the United States, the unprecedented earthquake swarm near San Francisco that I reported on the other day is getting even worse. The following comes from NBC News…

The earthquake swarms in one San Francisco Bay Area city keeps rising, and according to the US Geological Center’s past historical data, has shattered old records.

As of Wednesday, the USGS noted that San Ramon, about 45 miles from San Francisco had experienced 446 quakes, including 86 quakes that were a magnitude of 2.0 or higher, since Oct. 13. A total of 28 earthquakes have been documented alone since Tuesday.

San Ramon had previously set a record in 2003 when a swarm of 120 earthquakes struck there over 31 days.

And that is not the only unusual “shaking” inside the U.S. that is raising eyebrows lately. Not too far from Yellowstone, a giant crack in the ground has formed…

A dramatic crack has suddenly formed in the foothills of Wyoming‘s Bighorn Mountains that measures an impressive 750 yards long and 50 yards wide. It was discovered recently by surprised backcountry hunters who travel frequently to the area in search of game.

First reported by SNS Outfitter & Guides, a hunting company, on their Facebook page, the mammoth chasm appeared over the course of just a couple of weeks. It’s an impressive example of just how quickly very large geological events can occur under the right conditions.

“Everyone here is calling it ‘the gash.’ It’s a really incredible sight,” wrote SNS on the group’s Facebook page.

In just about every possible way that you can imagine, our world is becoming more unstable. In North America, we have been blessed with a long period of peace and prosperity, and we have had only a few major seismic events over the past several decades.

But now things are changing. The planet is starting to shake, and I believe that it is going to get a lot worse in the years ahead. And these great natural disasters that are coming will combine with all of the other major problems that we are currently facing to create something of a “perfect storm” which will bring our nation to its knees.

Or could it be possible that I am being too “pessimistic”? Please feel free to tell us what you think by posting a comment below…