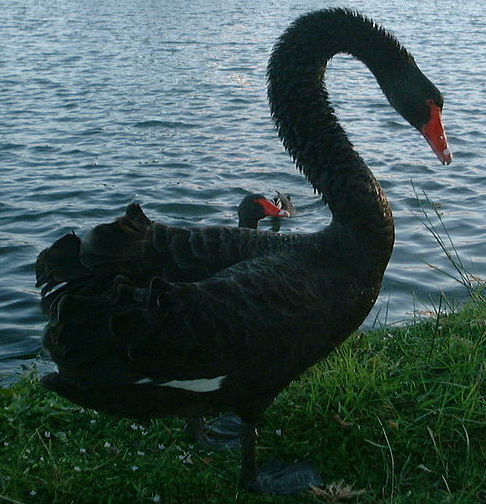 The black swans are circling like vultures now. Dark economic events seem to be flying in out of nowhere for those who have vision to see them. Even dovish New York Fed President William Dudley, who cannot tell the difference between money and hot air, sees a lot of black in the skies now and says that he is less confident about the economy than he was when he and his Feddish partners voted to raise interest rates last December:

Dudley, a close ally of Fed Chair Janet Yellen and a permanent voter on U.S. monetary policy, suggested that the sharp global economic slowdown, stock-market sell-off and oil price slide since the beginning of the year may force the Fed to tighten monetary policy even more slowly…. With turbulence in global financial markets reflecting mixed economic signals, the risks appear to have increased. (NewsMax)

Yes, Dudley did wrong with perfect timing and voted to raise interest rates into a crashing economy. For some reason, he didn’t see the global slowdown coming, never mind that it had already begun last fall; but he sure sees it now. He could have read all about it right here for months before he took part in an ill-fated decision. Now he’s losing confidence. If he’s not confident in the recovery and he was one of the architects, why should you be?

Jim Cramer, CNBC’s hyperactive host of Mad Money, thinks the Fed is flying blind. He believes the Fed might not understand the life of the common man from within their first-class flights to Fed meetings and chauffeured limousines. Gee, yathink?

I almost wonder if they live in a vacuum. Who are they talking to? Don’t they at least have some buddies who are concerned about a recession? Don’t they know some people are pulling back from investing…? When you look beyond the market’s tight linkage to the price of oil, the idea that we could be headed into a recession has become a powerful theme, a whispered undercurrent in this environment that surfaces whenever oil takes a dive. (NewsMax)

You almost wonder? Of course, they live in a vacuum. And from their vacuums, they are creating a world of Hoovervilles. Of course, Cramer likes to roll dice in the Fed’s Wall Street casino. He knows that Fed free money was the only game in town, driving the stock market higher in past years. He loved a good rigged game of predictable market gains! The market soared every time the Fed threw money around the craps tables. It didn’t even matter what number you rolled. Almost every bet was a winner. I’t’s hard to make money now without Fed free money floating down like confetti over the marketplace everyday.

So, yes, recession is now a powerful theme that keeps popping its ugly black head out from unexpected places, such as out of the mouth of Jim Cramer. It whispers among the chatter of Citigroup’s flock of analysts. It keeps JP Morgan meetings all aflutter. You hear it everywhere now. Not a day goes by without people wondering if recession is lurking in the wings.

That is not intended as an exhaustive list or even as a list of the worst things flying around us. That is just a short list of headline items from the past week’s news. So, call it the most current flurry of dark rumors and black swan events. Not all of these are true “black swans” because, if people were paying attention they could see them coming (for example, if they were reading this blog ; ) A “black swan” event is meant to mean a deadly event that comes in out of nowhere; but many refuse to see these things coming. For those wearing the blinders of economic denial, many things fly in out of nowhere that were anticipated by the minority that has been paying attention.

If you think either the global economy or the stock markets of this world are riding a rally back to success with all that bad economic news in just one week, you’ve been hitting the happy juice again.

I sometimes miss my mark when I make predictions, but when I do, I admit it. Last fall, I missed it very pointedly on one thing. I predicted two major black swan events would contribute to a crashing stock market. One of those events would be that Republicans would let the US default on its debt by November third. Obviously, that dark swan never landed and is a bird that never bit.

Fortunately, I didn’t bet my blog on that one as I did with the other date I predicted for an event that did become a major contributor to an immediate stock market crash. Boehner wrangled his rascally gang into a going-away present for himself, and then they anointed Paul Ryan as the Great White Swan.

But I made a bigger point in that “Black Swan” article (linked at the start of this one)  over falling commodity prices. And that cause of a market crash proved true. So, the US stock market crashed even though one of the anticipated causes didn’t happen, and that’s the more important sense in which I say, somewhat tongue in cheek, even when I’m wrong I’m right. It was the fall of the stock market that I bet m blog on, not which anticipated event would come through as the cause.

The one cause that I talked about that did come through remains the biggest, blackest swan of all. It’s the swan that floated in, drenched in cheap crude oil in January. That raging swan, black due to the deluge of oil, stomped the market every step of its way down, and it is still mucking about on the beach, stirring up trouble.

The point with the list above is is that no particular event has to happen to take the market down the next leg of its collapse. There are so many black-swan type of events waiting in the wings to take over that it is virtually certain some of these will grow to a size that becomes devastating, even after the crude swan is finished trashing about. There is practically a parade of black swans lined up for action. Look at how many poked their heads up in just the past week — all just waiting their turn to have a go at the market.

Will it be bankruptcies in shipping, oil drilling, auto loans and student loans that pile up into a big enough heap to implode a couple of major banks, or will it be the Chinese flush turning into a whirlpool that sucks all industry down, or will US economy manage to hold on until the next housing collapse when the next wave of adjustable-rate mortgage failures hits people who only put 3% down so that banks lose a bundle in foreclosures during a market of falling prices? Or will it simply be that recession is already here as a sinking tide that lowers all boats? Or will the next big drop arrive in the next week’s list where a true black swan emerges that NO ONE saw coming, not even me?

My point has always been that with so much bad economic news building up in the world and such monstrous overhangs of national, corporate and personal debt — mostly worse than the last time around — the odds are strongly stacked on the side of major trouble. If you’re wise you’ll prepare for that in reasonable and prudent ways.

(Originally published by David Haggith of the Great Recession Blog)