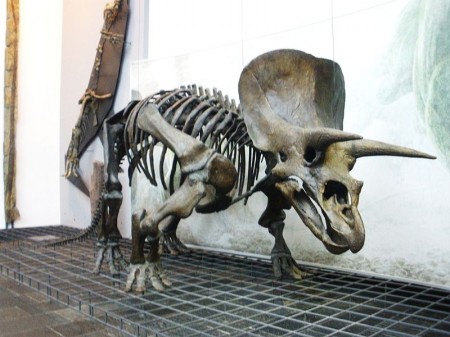 A scientist was terminated from his job at a California State University after discovering soft tissue on a triceratops fossil, and then publishing his findings. Pacific Justice Institute filed suit, yesterday, with the Los Angeles County Superior Court, against the board of trustees of CSU, Northridge, citing discrimination for perceived religious views.

“Terminating an employee because of their religious views is completely inappropriate and illegal,” commented Brad Dacus, President of PJI. “But doing so in an attempt to silence scientific speech at a public university is even more alarming. This should be a wakeup call and warning to the entire world of academia,” he continued.
While at a dig at Hell Creek formation in Montana, the scientist, Mark Armitage, came upon the largest triceratops horn ever unearthed at the site. When examining the horn under a high-powered microscope back at CSUN, Armitage was fascinated to see the soft tissue. The discovery stunned members of the scientific community because it indicates that dinosaurs roamed the earth only thousands of years in the past rather than going extinct 60 million years ago.

According to court documents, shortly after the original soft tissue discovery, a university official challenged the motives of Armitage, by shouting at him, “We are not going to tolerate your religion in this department!”

Armitage, a published scientist of over 30 years, was subsequently let go after CSUN abruptly claimed his appointment at the university of 38 months had been temporary, and claimed a lack of funding for his position. This was news to him, and contradicted prior statements and documents from the university.