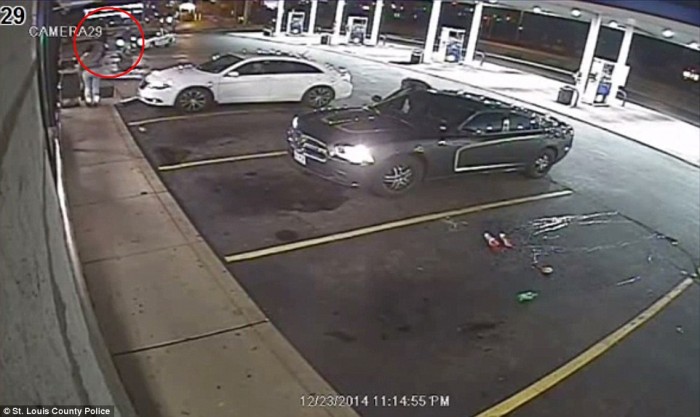 A black teenager has been shot dead by a police officer at a gas station only a few miles from where Michael Brown was killed in Ferguson, Missouri – and surveillance footage apparently shows him pointing his gun at the cop before he was killed.

The victim, named by relatives as Antonio Martin, 18, was killed at a Mobil gas station on North Hanley Road in Berkeley at about 11.15pm on Tuesday.

Toni Martin, who has disputed the police account of the killing, was heard crying ‘that’s my baby,’ as she pointed towards his body under a yellow sheet, while hundreds of people descended on the area, detonating explosives and throwing bricks at officers in protest of police brutality.

But speaking about the death on Wednesday morning, Berkeley Mayor Theodore Hoskins said that the incident should not draw comparisons with the death of Michael Brown, who was unarmed and whose death was not caught on camera. Mayor Hoskins, who himself is black, added that Berkeley has a predominantly African American police force so his officers are more sensitive to race relations than officers in Ferguson.

1 thought on “CCTV shows moment black teen, 18, raises and points loaded gun at St Louis cop before being shot dead as mayor says this is ‘different’ from Ferguson shooting”