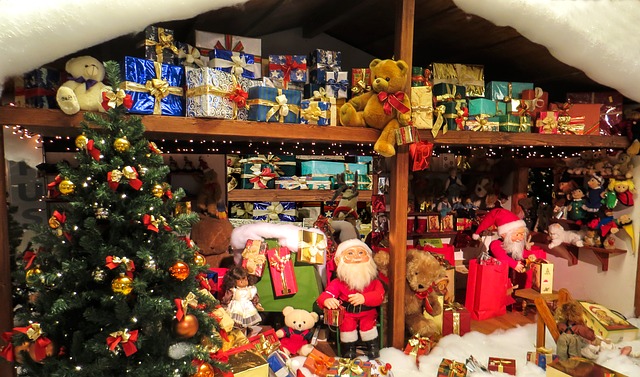 For most people, Christmas is all about the presents. But how did such a supposedly sacred holiday become a festival of greed? Not many people know the history behind Christmas gift giving, and it will probably shock you. This year, Americans will spend somewhere in the neighborhood of 600 billion dollars on Christmas, but most people have no coherent explanation for why they are buying all of these gifts. Those that are Christian will tell you that they are doing it to celebrate the birth of Christ, but as you will see below, gift giving on this holiday originated long before Christ was born. Others will tell you that they are just following tradition, but most of them have absolutely no idea where the tradition of Christmas gift giving originally came from. And the truth is that most people simply don’t care about the history. They are just excited about all of the stuff that they are going to get on December 25th. But if you are curious to learn how Christmas became a festival of greed, just keep reading…

In early America, there was no Christmas gift giving. In fact, the Puritans greatly disapproved of celebrating the holiday, and in some areas the celebration of Christmas was actually banned by law.

For example, if you were caught celebrating Christmas in the state of Massachusetts from 1659 to 1681 you could be fined five shillings…

On May 11, 1659, the Massachusetts Bay Colony legislature even went so far as to officially ban Christmas and gave anyone found celebrating it a fine of five shillings. The legislature stated the ban was needed “For preventing disorders arising in severall places within this jurisdiceon, by reason of some still observing such festivalls as were superstitiously kept in other countrys, to the great dishonnor of God & offence of others, it is therefore ordered … that whosoever shall be found observing any such day as Christmas or the like, either by for-bearing of labour, feasting, or any other way, upon any such account as aforesaid, every such person so offending shall pay for every such offence five shillings, as a fine to the county.”

The ban remained in place for 22 years until it was repealed in 1681 after a new surge of European immigrants brought a demand for the holiday. Even though the ban was lifted, Christmas was not warmly embraced by the puritans and it remained a dull and muted holiday over two centuries later.

But weren’t the Puritans Christians?

Didn’t they want to honor the Lord Jesus?

Of course they were Christians. They took their faith incredibly seriously. But they also knew their history a lot better than we do.

Most Christians do not realize this, but Christians did not celebrate anything in late December for the first 300 years after the time of Jesus. The only people that celebrated anything at that time were the pagans.

By now, most of you are probably aware of the great Roman celebration known as Saturnalia. But most people don’t know that our tradition of gift giving can be traced back to that holiday. The following is how Wikipedia describes this ancient pagan festival…

Saturnalia was an ancient Roman festival in honor of the deity Saturn, held on the 17th of December of the Julian calendar and later expanded with festivities through to the 23rd of December. The holiday was celebrated with a sacrifice at the Temple of Saturn, in the Roman Forum, and a public banquet, followed by private gift-giving, continual partying, and a carnival atmosphere that overturned Roman social norms: gambling was permitted, and masters provided table service for their slaves. The poet Catullus called it “the best of days.”

Most people do not realize this, but the priests of Saturn would even carry wreaths of evergreen boughs in procession throughout the pagan Roman temples. These processions probably looked at least a little bit similar to our Christmas parades today.

So precisely who was Saturn? Here is more from Wikipedia…

Saturn (Latin: Saturnus) is a god in ancient Roman religion, and a character in myth. Saturn is a complex figure because of his multiple associations and long history. He was the first god of the Capitol, known since the most ancient times as Saturnius Mons, and was seen as a god of generation, dissolution, plenty, wealth, agriculture, periodic renewal and liberation. In later developments he came to be also a god of time. His reign was depicted as a Golden Age of plenty and peace. The Temple of Saturn in the Roman Forum housed the state treasury. In December, he was celebrated at what is perhaps the most famous of the Roman festivals, the Saturnalia, a time of feasting, role reversals, free speech, gift-giving and revelry. Saturn the planet and Saturday are both named after the god.

Eventually, the Romans began holding a festival at the end of Saturnalia on December 25th called Dies Natalis Solis Invicti, which means “the birthday of the unconquered sun”. Throughout the empire, the “rebirth of the sun” was celebrated with great revelry. The winter solstice was past and now the days were starting to get longer again. It was a seemingly logical time to honor “the rebirth of the sun god”.

When the Roman Empire legalized Christianity in the early 4th century, the Roman government began to put a lot of pressure on church leaders to fit into the broader society. So eventually the birthday of the Son of God was moved to the time when the rest of society was celebrating “the rebirth of the sun god”. December 25th was first celebrated as the birthday of Jesus in about 336 AD, and in the year 350 AD Pope Julius I officially decreed that Christians would celebrate that day from then on. At first, the new holiday was slow to be adopted by Christians and it was not widely observed until about the year 400.

And of course Jesus was not actually born in late December. The evidence that we have indicates that he was most probably born in the fall during the Feast of Tabernacles. The only reason people celebrate the birth of Jesus on December 25th today is because the Catholics of the 4th century wanted to appease the pagan Roman government and the pagan culture at large.

Over time, the practice of gift giving during late December faded, and by the early 19th century the big tradition was actually to open presents on New Year’s Day. But then merchants saw an opportunity. According to historians, advertisements for “Christmas presents” began appearing in newspapers in the United States in the 1820s…

Buying gifts to celebrate Christmas is steeped in tradition, dating to the 1820s when newspapers began to advertise items for Christmas presents, according to the Connecticut Historical Society.

“This holiday market place is part of the larger birth of the consumer culture that extends itself to all aspects of our social life,” said Leigh Eric Schmidt, author of “Consumer Rites” (Princeton University Press, 1995).

Schmidt, a professor of religion at Princeton University in New Jersey, said if the nation had continued the practice of giving gifts only as mementos for New Year’s, Christmas would not have evolved into the huge retail venture it is today. There would have been more focus on the religious aspects of the holiday. But all that changed when gift-giving became a way to honor family relationships.

And at first, Christmas in America was nothing like the festival of greed that it is today. Gifts were usually small, modest and personal. The following is one description of the tradition of Christmas gift giving during that era…

In the 1820s, ’30s and ’40s merchants had noticed the growing role of gifts in the celebration of Christmas and New Year. Starting in the mid- to late- 1850s, imaginative importers, craftspersons and storekeepers consciously reshaped the holidays to their own ends even as shoppers elevated the place of Christmas gifts in their home holiday. However, for all the efforts of businessmen to exploit the season Americans persistently attempted to separate the influence of commerce from the gifts they gave.

What emerged was a kind of dialogue between consumers and merchants. Many gift-givers, for instance, ranked handmade gifts over purchased or totally manufactured ones. Retailers responded by marketing partially assembled goods to which givers applied the finishing touches. Americans also moderated the relationship between commerce and giving by wrapping the gifts they gave. The custom had once been merely to give a gift unadorned and uncovered, but a present hidden in paper heightened the effect of the gesture, fixing the act of giving to a moment of revelation. Wrapping also helped designate an item as a gift. As gifts came increasingly from stores, factories and homes of cottage labourers, paper and string helped redefine an object to meet its social use. The commercial work comprehended the importance of this symbolic transformation of goods. Grander stores began to wrap gifts purchased from their stock in distinctive, coloured papers, tinsel cords and bright ribbons, as part of their delivery services. Thus, while paper might have blurred a present’s association with commerce in some cases, in others it advertised a material status associated with patronizing the ‘right’ store.

Over time, Christmas gifts came to be associated with a mythical gift giver in cultures all over the globe.

Of course in the United States this mythical gift giver is known as “Santa Claus”, but in other areas of the planet the traditions are very different…

Current tradition in several Latin American countries (such as Venezuela and Colombia) holds that while Santa makes the toys, he then gives them to the Baby Jesus, who is the one who actually delivers them to the children’s homes, a reconciliation between traditional religious beliefs and the iconography of Santa Claus imported from the United States.

In South Tyrol (Italy), Austria, Czech Republic, Southern Germany, Hungary, Liechtenstein, Slovakia, and Switzerland, the Christkind (Ježíšek in Czech, Jézuska in Hungarian and Ježiško in Slovak) brings the presents. Greek children get their presents from Saint Basil on New Year’s Eve, the eve of that saint’s liturgical feast. The German St. Nikolaus is not identical with the Weihnachtsmann (who is the German version of Santa Claus / Father Christmas). St. Nikolaus wears a bishop’s dress and still brings small gifts (usually candies, nuts, and fruits) on December 6 and is accompanied by Knecht Ruprecht. Although many parents around the world routinely teach their children about Santa Claus and other gift bringers, some have come to reject this practice, considering it deceptive.

This article may upset some people because their Christmas traditions are so deeply cherished.

But there is no reason to be upset.

If you are going to do something, you should know why you are doing it.

Knowing our history empowers us to take control of our lives and to make better decisions.

As a Christian, I never knew any of the history behind Christmas when I was growing up. So I could never explain the reasons for why I was doing the things that I was doing to others.

And no holiday should ever be a festival of greed.

So whatever you are celebrating this time of the year, make sure it is for the right reasons and not the wrong ones.

1 thought on “How Did Christmas Become A Festival Of Greed?”