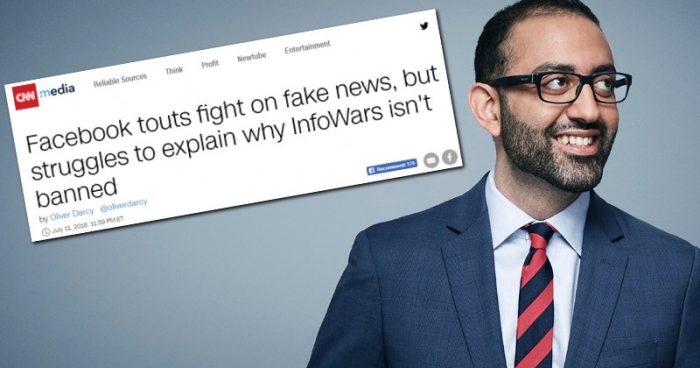 (Infowars) After failing in its efforts to have YouTube shut down the Alex Jones Channel, CNN is now lobbying Facebook to shut down Infowars.

In an article for CNN, senior media reporter Oliver Darcy explains how he tried to convince Facebook top brass to terminate our Facebook presence.

“Facebook invited me to an event today where the company aimed to tout its commitment to fighting fake news and misinformation. I asked them why InfoWars is still allowed on the platform. I didn’t get a good answer,” tweeted Darcy.

Facebook invited me to an event today where the company aimed to tout its commitment to fighting fake news and misinformation.

I asked them why InfoWars is still allowed on the platform.

I didn’t get a good answer.https://t.co/WwLgqa6vQ4

In his CNN piece, Darcy reveals how he asked the head of Facebook’s News Feed John Hegeman, “How the company could claim it was serious about tackling the problem of misinformation online while simultaneously allowing InfoWars to maintain a page with nearly one million followers on its website.”

Hegeman explained that InfoWars has “not violated something that would result in them being taken down.”

Not satisfied, Darcy asked Facebook product specialist Sara Su why Facebook allowed Infowars to operate a page when it “is notorious for spreading demonstrably false information and conspiracy theories on a host of issues.”

“We work hard to find the right balance between encouraging free expression and promoting a safe and authentic community, and we believe that down-ranking inauthentic content strikes that balance,” said Facebook spokeswoman Lauren Svensson. “In other words, we allow people to post it as a form of expression, but we’re not going to show it at the top of News Feed.”

Darcy’s article was shared by innumerable other CNN and mainstream media hacks in a coordinated effort to circulate the same narrative.