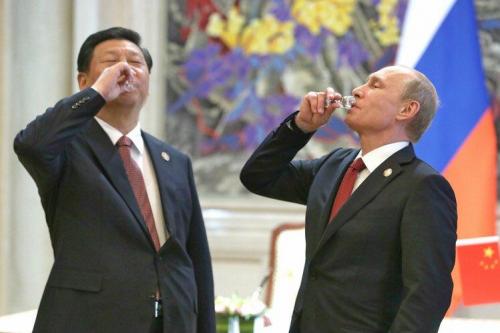 On April 22, 1996 Dumitru Duduman had an incredible supernatural encounter.  During this encounter, he was shown details regarding the coming world war involving the United States, Russia and China.  As U.S. relations with both Russia and China continue to deteriorate, we can see the stage being set for the fulfillment of this prophecy…

I prayed, then went to bed. I was still awake, when suddenly I heard a trumpet sound. A voice cried out to me, “Stand!”

In my vision, I was in America. I walked out of my home, and began to look for the one who had spoken to me. As I looked, I saw three men dressed alike. Two of the men carried weapons. One of the armed men came to me. “I woke you to show you what is to come.” He said. “Come with me.”

I didn’t know where I was being taken, but when we reached a certain place he said, “stop here!”

A pair of binoculars was handed to me, and I was told to look through them.

As I was looking, I saw a great light. A dark cloud appeared over it. I saw the president of Russia, a short, chubby man, who said he was the president of China, and two others. The last two also said where they were from, but I did not understand. However, I gathered they were part of Russian controlled territory. The men stepped out of the cloud.

The Russian president began to speak to the Chinese one. “I will give you the land with all the people, but you must free Taiwan of the Americans. Do not fear, we will attack them from behind.”

A voice said to me, “Watch where the Russians penetrate America.”

I saw these words being written: Alaska; Minnesota; Florida.

Then, the man spoke again, “When America goes to war with China, the Russians will strike without warning.”

The other two presidents spoke, “We, too, will fight for you.” Each had a place already planned as a point of attack.

All of them shook hands and hugged. Then they all signed a contract. One of them said, “We’re sure that Korea and Cuba will be on our side, too. Without a doubt, together, we can destroy America.”

The president of Russia began to speak insistently, “Why let ourselves be led by the Americans? Why not rule the world ourselves? They have to be kicked out of Europe, too! Then I could do as I please with Europe!”

The man standing beside me asked, “This is what you saw: they act as friends, and say they respect the treaties made together. But everything I’ve shown you is how it will REALLY happen. You must tell them what is being planned against American. Then, when it comes to pass, the people will remember the words the Lord has spoken.”

“I am the protector of America. America’s sin has reached God. He will allow this destruction, for He can no longer stand such wickedness. God however, still has people that worship Him with a clean heart as they do His work. He has prepared a heavenly army to save these people.”

As I looked, a great army, well armed and dressed in white, appeared before me.

“Do you see that?” the man asked. “This army will go to battle to save My chosen ones. Then, the difference between the Godly and the ungodly will be evident.”