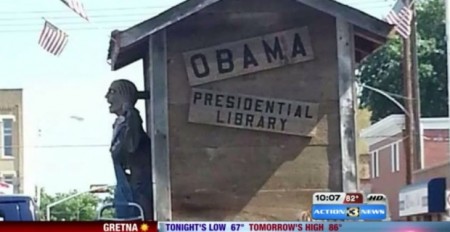 Following complaints by the NAACP, the Department of Justice is investigating a parade float, labeled “racist” by the Nebraska Democratic Party, which featured President Obama depicted as a zombie.

The float, which featured in last week’s July 4th annual Independence Day parade in Norfolk, Nebraska, depicted a zombie stood outside a hut adorned with the words “Obama Presidential Library.”

The Nebraska Democratic Party responded by describing the float as among the “worst shows of racism and disrespect for the office of the presidency that Nebraska has ever seen.”

What makes the controversy even more ludicrous is that the creator of the float, a local farmer, said the zombie wasn’t even supposed to represent Obama, but instead was a depiction of a victim of the recent VA health care scandal.