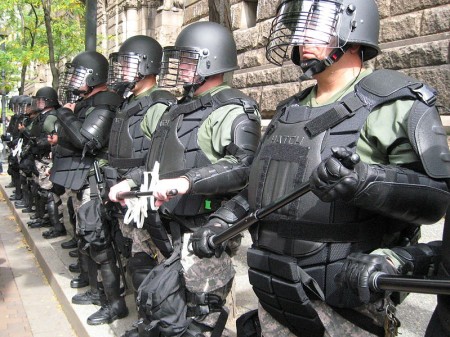 If the United States is a police state, then the Department of Homeland Security (DHS) is its national police force, with all the brutality, ineptitude and corruption such a role implies. In fact, although the DHS’ governmental bureaucracy may at times appear to be inept and bungling, it is ruthlessly efficient when it comes to building what the Founders feared most—a standing army on American soil.

The third largest federal agency behind the Departments of Veterans Affairs and Defense, the DHS—with its 240,000 full-time workers, $61 billion budget and sub-agencies that include the Coast Guard, Customs and Border Protection, Secret Service, Transportation Security Administration (TSA) and the Federal Emergency Management Agency (FEMA)—has been aptly dubbed a “runaway train.”

In the 12 years since it was established to “prevent terrorist attacks within the United States,” the DHS has grown from a post-9/11 knee-jerk reaction to a leviathan with tentacles in every aspect of American life. With good reason, a bipartisan bill to provide greater oversight and accountability into the DHS’ purchasing process has been making its way through Congress.

A better plan would be to abolish the DHS altogether. In making the case for shutting down the de facto national police agency, analyst Charles Kenny offers the following six reasons: one, the agency lacks leadership; two, terrorism is far less of a threat than it is made out to be; three, the FBI has actually stopped more alleged terrorist attacks than DHS; four, the agency wastes exorbitant amounts of money with little to show for it; five, “An overweight DHS gets a free pass to infringe civil liberties without a shred of economic justification”; and six, the agency is just plain bloated.

To Kenny’s list, I will add the following: The menace of a national police force, a.k.a. a standing army, vested with so much power cannot be overstated, nor can its danger be ignored. Indeed, as the following list shows, just about every nefarious deed, tactic or thuggish policy advanced by the government today can be traced back to the DHS, its police state mindset, and the billions of dollars it distributes to police agencies in the form of grants.