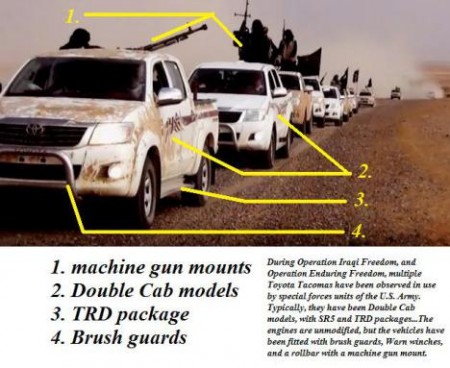 This you have to see to believe: the now iconic white Toyota trucks we see ISIS™ driving around look scarily familiar to ones purchased here in the states and outfitted by special forces which puts to rest the notion that ISIS™ simply ran up to a dealership in Iraq and made off with 30 or so vehicles. They aren’t even SOLD in Iraq and certainly not with these modifications. At least not as an entire fleet.

Isn’t it strange that “ISIS” just happens to be pictured along with a convoy of Toyota trucks that at least appear to be modified the exact same way special forces has them outfitted before shipping them from the factory in Texas?

When you combine this latest discovery with the fact that “ISIS” has 1. U.S. military small arms 2. U.S. military Humvees 3. U.S. military artillery 4. U.S. citizens running their online social media campaigns 5. John McCain met with destabilization campaign terrorists in Syria including someone from the newly formed “ISIS” in March of 2013… what conclusion would a reasonable person come to?