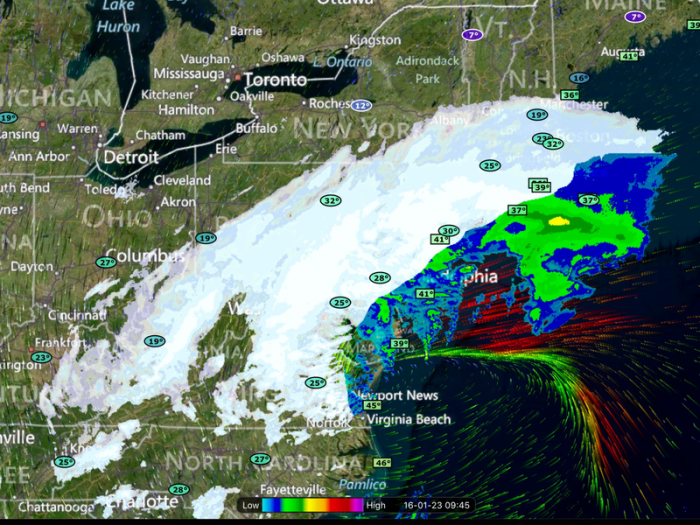 On January 22nd, one of the worst east coast blizzards in history slammed into Washington D.C. like a freight train. More than three feet of snow was dumped on some areas, hundreds of thousands of people were left without power, and coastal cities all long the eastern seaboard experienced flooding to a degree not seen since Hurricane Sandy. Tens of millions of people live in communities that were completely paralyzed by this storm, and it is being projected that the total amount of economic damage done will ultimately be in the billions of dollars. January 22nd also happens to be the anniversary of the U.S. Supreme Court decision that legalized abortion in all 50 states. Since that Supreme Court decision, more than 58 million babies have been murdered in abortion clinics in America. Could it be possible that it is more than just a “coincidence” that both of these events happened on January 22nd?

In a previous article, I noted that this east coast blizzard was officially given the name “Jonas”. It turns out that “Jonas” is actually a Greek transliteration of the Hebrew name “Jonah”.

In the Bible, Jonah was sent to the city of Ninevah to warn that the judgment of God was about to come. Some are suggesting that it may not be any accident that a historic blizzard named after this Biblical prophet hit Washington D.C. on the exact anniversary of the Roe vs. Wade decision.

And without a doubt, this was a whopper of a storm. According to USA Today, some cities broke their all-time records for snowfall from a single storm…

It was the biggest snowstorm ever recorded for three cities — Baltimore (29.2 inches), Allentown, Pa. (31.9) and Harrisburg, Pa. (34), the National Weather Service said. New York City picked up 26.8 inches of snow, missing its all-time record by one-tenth of an inch.

In the D.C. area things were absolutely crazy. Dulles Airport got a total of 29.3 inches of snow, and Baltimore-Washington International Airport got 29.2 inches of snow. Some of the outlying areas actually got closer to three feet of snow, and it could take weeks for transportation in the region to get back to normal.

New York City got absolutely pummeled as well. CNN is reporting that John F. Kennedy International Airport got 31 inches of snow and New York’s Central Park has been buried under 27 inches of snow.

In addition to crazy amounts of snow, vast stretches right along the coast had to deal with tremendous flooding. In fact, CNN is reporting that the flooding was even worse than during Hurricane Sandy in some areas…

Margate City, just down the coast from Atlantic City, was also affected.

“In a lot of our business areas and our back bay areas, water is coming over the bulkhead in a lot of the same areas as Hurricane Sandy hit,” Lt. Matt Hankinson of the Margate City Police Department said. “Some areas I would say it’s thigh- to waist-deep.”

Farther south in North Wildwood, the high tide was much higher than anticipated and caught many of the town’s 5,000 year-round residents off guard — with flooding levels that actually exceeded those during Hurricane Sandy, said Patrick Rosenello, the city’s mayor.

Meanwhile, a very powerful El Nino pattern continues to send storm after storm slamming into the west coast. It didn’t get much publicity because of the giant blizzard on the east coast, but the California coastal city of Pacifica just declared a state of emergency due to the damage from these storms. The following comes from the Daily Mail…

As the East Coast is hit with one of the most powerful storms in recent years, the West Coast is continuing to be slammed with storms thanks to El Nino.

The city of Pacifica in northern California declared a state of emergency Friday after continuous El Nino storms slammed into the city’s coastline,KNTV reported.

A sinkhole and a severely damaged sea wall are part of the destruction in the city from the wild winter weather.

All of this continues a very unusual pattern of disasters that we have been witnessing over the past six months. Just consider what we have seen happen since last September…

-Around the turn of the year the middle part of the country experienced absolutely horrific flooding. The only thing people can really compare it to is the great flood of 1993, and Missouri Governor Jay Nixon says that some communities saw floodwaters get to “places they’ve never been before”. Normally if the middle of the country is going to see flooding like this, it is going to happen when the snow begins to thaw in the spring. For something like this to happen in December is absolutely unprecedented.

-Prior to that, a conveyor belt of storms that barreled into coastal areas of Oregon and Washington caused horrible flooding in many areas. In fact, in early December we witnessed the wettest day in the history of Portland, Oregon. The resulting landslides and floods made headlines all over the nation.

-Before that, the remnants of Hurricane Patricia caused nightmarish flooding in many parts of Texas. The flooding was so bad that at one point an entire train was knocked off the tracks.

-Out on the west coast, flash flooding in southern California sent rivers of mud streaming across highways in southern California. The lifeless body of one man that had his vehicle completely buried in mud was recovered several days later because that is how long it took emergency workers to get to him.

-To kick things off, moisture from Hurricane Joaquin caused horrible flooding all up and down the east coast back in early October. The governor of South Carolina said that it was the worst rain that some parts of her state had seen in 1,000 years.

All of this flooding has happened since the end of September.

Never before in U.S. history have we ever seen a series of catastrophic floods like this within such a concentrated space of time.

And let us not forget that 2015 was also the worst year for wildfires in all of U.S. history, the state of Oklahoma absolutely shattered their yearly record for earthquakes, and much of the rest of the country has been experiencing highly unusual natural disasters. In fact, the state of Alaska was hit by a 7.1 magnitude earthquake just today.

In addition, my regular readers already know that global financial markets have just had their worst start to a year in all of modern history.

Could someone be trying to tell us something?

Most people out there would dismiss such a suggestion without even thinking about it. To most Americans, it must just be a “coincidence” that we have been hit by major disaster after major disaster since the month of September.

But there are others that would point out that you eventually reap what you sow, and this nation has been doing a tremendous amount of evil for a very long time.

As I mentioned at the top of this article, America has murdered more than 58 million babies since 1973. Instead of being horrified at our crimes, we just continue to shake our fist at God as we celebrate all of the evil that we are doing. In fact, Barack Obama took time out of his day on Friday to actually celebrate the anniversary of Roe v. Wade…

“Today, we mark the 43rd anniversary of the Supreme Court ruling in Roe v. Wade, which affirmed a woman’s freedom to make her own choices about her body and her health,” said Obama.

Despite being shown our guilt over and over again, we have absolutely refused to change our ways, and so now we will pay the price for our crimes.

As I have said on television, on the radio and in my articles, 2016 is the year when everything changes.