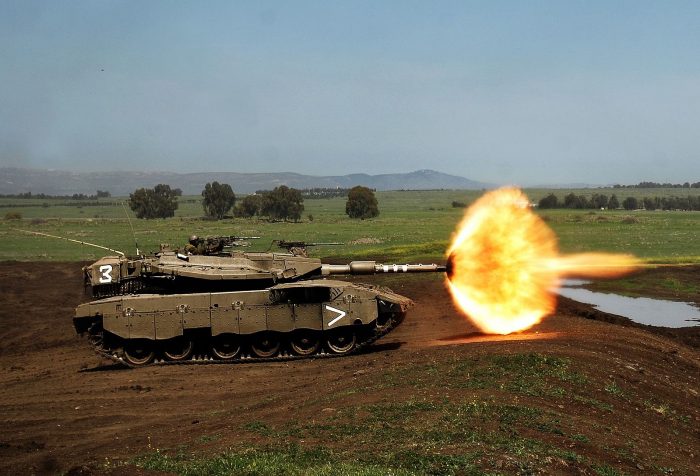 Another extremely bloody border protest on Friday has pushed Israel and Hamas to the brink of war. The Egyptians had been urging Hamas to tone down the border protests, but that did not happen. Instead, Hamas is pledging to continue the border protests for as long as it takes to end the Israeli blockade. So Israel has a choice to make. Either it can end the blockade, accept the endless violence that is currently taking place along the border, or invade Gaza. The Israelis have already stated very clearly that the blockade will not end, because everyone understands that weapons and fighters will pour into Gaza if that happens. So it looks like the choice will come down to living with the border violence or invading Gaza, and living with the border violence does not appear to be an acceptable choice either. On Friday, 10,000 Hamas protesters showed up at the border fence, and 130 of them got shot during the violence that erupted…

Israeli soldiers shot and wounded 130 Palestinians during protests near the Gaza Strip border on Friday, the enclave’s Health Ministry said.

An Israeli military spokeswoman said about 10,000 demonstrators massed at the border and that some threw burning tires, grenades and explosive devices at the troops across the fence.

Friday’s chaos followed more violence earlier in the week. On Wednesday, a rocket that was fired from Gaza obliterated a home in southern Israel, and another rocket landed not too far from Tel Aviv. The Jewish people have been greatly outraged by these attacks, and their patience has worn very thin.

In response to those attacks, the IDF hit targets in Gaza with airstrikes.

In an article just a few days ago, I noted that Israeli Defense Minister Avigdor Liberman is now saying that he believes that war between Israel and Hamas is “inevitable”. And on Thursday, Israel made a major move in that direction by massing tanks along the Gaza border…

On Thursday Israel had ramped up armored forces along the Gaza border, a day after a rocket fired from the enclave destroyed a home in southern Israel. Israeli Prime Minister Benjamin Netanyahu, vowed “very strong action” if attacks continued.

In fact, it is being reported that this massing of tanks along the border represents “the largest mustering of forces since the 2014 war”…

Reuters has reported some 60 Israeli tanks and armored personnel carriers now stationed at a deployment area along the border as of Thursday, which is the largest reported mustering of forces since the 2014 war between Israel and Hamas.

This would be a war that would not benefit anyone, but it is very difficult to see how it will be avoided at this point.

Hamas could avoid war by simply ending the protests, but they have pledged not to do that.

Israel can keep hammering Gaza with airstrikes, but that definitely will not stop the violence. The only thing that could permanently stop the violence is a full-blown invasion of Gaza with the intention of completely eliminating Hamas.

But that would be an exceedingly bloody mission, and it could potentially spark a much broader Middle East war.

The mainstream media in the United States has been mostly silent about this looming conflict, but the truth is that this is an extremely serious situation. Just check out what Nickolay Mladenov told the UN Security Council on Thursday…

Special UN envoy for the Middle East, Nickolay Mladenov, told the UN Security Council on Thursday that “we remain on the brink of another potentially devastating conflict, a conflict that nobody claims to want, but a conflict that needs much more than just words to prevent”.

If someone was constantly sending rockets, grenades and incendiary devices across the U.S. border, the American people would be screaming and yelling for the military to do something, and rightly so.

Israel is not going to put up with all of this violence for much longer, but there is one huge problem. If Israel invades Gaza at this point, they will be considered to be the “aggressor” by most of the rest of the world. And in order to eliminate Hamas entirely, Israel would have to be ruthless, and images from the very bloody war would be endlessly broadcast throughout the Islamic world. This could greatly galvanize Israel’s other enemies, and it could very easily spark a broader conflict.

Israel is surrounded by nations that would love to see it wiped off the map, and if the right opportunity arose they would gladly join forces in an all-out attempt to defeat Israel once and for all.

But if that scenario were to unfold while Donald Trump was in the White House, the Trump administration would most certainly intervene militarily on the side of Israel, and that could potentially be the start of World War 3.

It isn’t true at this point, but U.S. relations with Israel will soon once again become one of the most divisive issues in U.S. politics. And a major war in the Middle East would go a long way toward destabilizing the entire globe.

We truly do live in apocalyptic times, and many are anticipating that global events will greatly accelerate during the months ahead.

Throughout much of human history, Israel has been at the center of attention, and now it is happening again.

Watch Israel very carefully, because the things that are happening over there right now are going to have very serious implications for all of us.