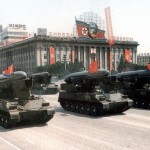 The most important news for Wednesday, May 27th…..

North Korea’s official news agency has announced that Kim Jong Il’s government will no longer abide by the 1953 armistice that ended the Korean War.  Now that the armistice has been done away with, some analysts are saying that North Korea and South Korea are now technically in a state of war.

Russia fears that the Korean conflict could quickly go nuclear.  With Kim Jong Il in power, anything is possible.

As North Korea saber rattles like never before, the world is watching what Barack Obama will do.

A shocking new study reveals that kids that get a flu shot are three times more likely to be hospitalized for the flu.  Do you still think that flu shots are such a great idea?

Is Sonia Sotomayor, Barack Obama’s pick for the Supreme Court, an environmental extremist?  Actually it would probably be more of a surprise if she wasn’t.

Uh oh…..U.S. government tax revenue plunged 138 billion dollars, or 34%, in April compared to once year ago.  Do you think this will stop Obama from spending money?

A new poll released by the Gallup organization reveals that 40 percent of Americans are in favor of legalizing gay marriage.

A stunning new Palestinian Authority peace plan revealed Thursday by Haaretz would include Iran as one of the administrators of the Temple Mount.  Talk about one of the worst ideas of all time….

Some analysts are now realizing that Barack Obama plans to do absolutely nothing to stop Iran from getting nuclear weapons.

Did you know that genetically modified soy accounts for 91 percent of soybeans planted in the U.S.?  If you still eat soy, you might want to read this article before ever eating it again.

No new taxes on the middle class?  What a joke.  Now the Obama administration is discussing the possibility of introducing a national sales tax.

The chief of staff of the U.S. Army says that the Pentagon is prepared to leave fighting forces in Iraq for as long as a decade.

The United States and Canada would own nearly three-quarters of a restructured General Motors according to the latest plan.  But don’t worry – this isn’t socialism…..