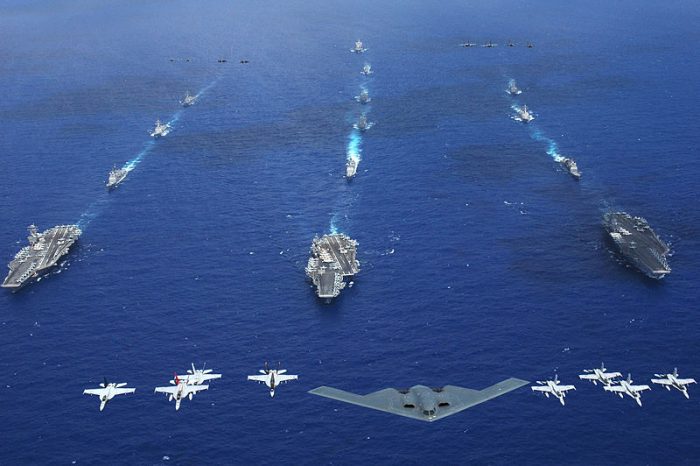 Will a false flag chemical attack in Syria’s Idlib province be the trigger that causes World War 3 to erupt in the Middle East? In Part I of this series, I discussed how previous chemical attacks that were blamed on the Assad regime actually turned out to be false flag attacks conducted by Syrian rebels that were absolutely desperate to draw the United States into the Syrian civil war on their side. And considering the fact that the Syrian rebels have been consistently losing territory in recent months, they are now more desperate than ever. So even though it didn’t work before, they probably figured that a false flag chemical attack was worth one more try, and so far the Trump administration appears to be buying it hook, line and sinker. Trump has called the attack a “terrible affront to humanity”, and he is placing all of the blame on the shoulders of the Assad regime. But now that Trump has committed the U.S. to take military action in Syria, what is that actually going to look like?

According to the Daily Mail, at this point Trump is not giving any hints as to when or where he will strike Syria…

He did not want to say in front of the cameras how he plans to respond to the crisis.

‘I don’t like to say where I’m going and what I’m doing,’ Trump reminded. ‘I watched past administrations say, “We will attack at such-and- such a day, at such-and-such an hour.’

But it isn’t difficult to imagine what Trump may decide to do. Past presidents have always favored using airstrikes to make a point, and that is what many of the “analysts” on television are recommending.

Unfortunately, there would be great risk in targeting Syrian forces, because contingents from Russia, Iran, Hezbollah and elsewhere are mixed in among the Syrian military.

So could you imagine what it would do to our relations with Russia if airstrikes against the Syrian military resulted in Russian deaths?…

President Trump has several options in Syria, none without great risk. One is military action against Syria’s air force – grounding the helicopters and fixed wing aircraft that are believed to have dropped the deadly agent – and the runways from which they operate. Yes, such strikes risk Russian casualties. But Moscow has consistently blocked U.N. action on Syria but proven unable to contain Mr. Assad’s bad behavior. And President Vladimir Putin would be forewarned. Grounding Syria’s air force, moreover, would help distance Mr. Trump from Mr. Putin, a politically useful benefit at this time.

And even if Trump did conduct airstrikes, there would be a limit as to what they could accomplish. President Assad would still be in power in Syria, and the Syrian government would still be winning the civil war.

Trump could potentially send in special forces with the intention of assassinating Assad, but that would not necessarily topple the entire regime.

The truth is that the only way to change the outcome of the war and to guarantee regime change would be to send in U.S. ground forces on a large scale. And just introducing them into the country would not nearly be enough. In order to end the war, Trump would have to commit to taking and holding Damascus.

In Isaiah 17, we are told that someday Damascus will be “taken away from being a city, and it shall be a ruinous heap.” Much of the city is already a heap of rubble, but if the U.S. were to start conducting a concentrated bombing campaign against the city it is easy to imagine how the entire city could soon come to resemble a “ruinous heap”.

Of course the toppling of the Assad regime has been the goal all along. Back in 2011, U.S. Secretary of State Hillary Clinton hatched a plan along with Saudi Arabia and Turkey to use the “Arab Spring” as an excuse to try to remove Assad from power. Since 74 percent of the population of Syria is Sunni Muslim, Saudi Arabia and Turkey were very excited about the prospect of dealing Iran a major blow by transforming Syria into a full-fledged Sunni nation. So Saudi Arabia, Turkey and other Arab countries spent billions of dollars supporting and arming the “rebels”, and at first everything was going great. But then Russia, Iran and Hezbollah all intervened, and now the tide of the war has completely turned.

The only way that the original plan can succeed now is for the United States to enter the war, but with Trump as president nobody thought that was going to happen.

But now this latest chemical attack has changed everything, and Trump appears poised to take military action in Syria.

I don’t know if most Americans understand how dangerous such a move could be. The Russians are not going to just sit there while U.S. bombs are dropping and their personnel are being killed. And of course the same thing could be said about Iran and Hezbollah.

Do we really want to risk a potential military confrontation with Russia, Iran and Hezbollah just to make a point in Syria?

To me, that would be exceedingly foolish.

And even more disastrous would be a decision to fully commit the U.S. military to toppling the Assad regime. That would require going all the way to Damascus, and it is very, very doubtful that the Russians, the Iranians and Hezbollah would just willingly stand aside and allow that to happen.

For quite a while I have been warning that the situation in Syria could potentially spark World War 3 if everyone was not very, very careful.

If U.S. warplanes try to strike Syrian military positions, the Russians could easily decide to start firing back.

And considering the anti-Russian hysteria that we are already witnessing in Washington D.C., how will our leaders respond when CNN starts showing U.S. aircraft being blown out of the sky by Russian missiles?

As I discussed in Part I, there is very little for the U.S. to gain by going to war in Syria. Unless it can be shown beyond a shadow of a doubt that the Assad regime is actually using chemical weapons, the Trump administration should not even be thinking about military action, because getting the U.S. military involved in the Syrian civil war would be absolutely disastrous.

So let us pray for peace, and let us hope that cooler heads will prevail.