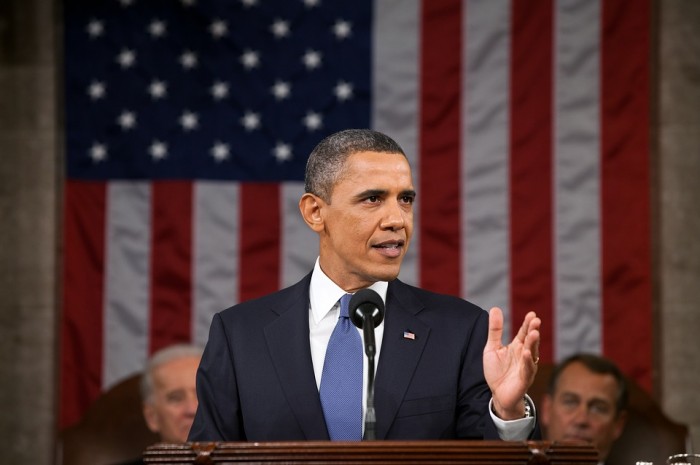 We just got another extremely disappointing GDP number. It was being projected that U.S. GDP would grow by 2.5 percent during the second quarter of 2016, but instead it only grew by just 1.2 percent. In addition, the Census Bureau announced that GDP growth for the first quarter of 2016 had been revised down from 1.1 percent to 0.8 percent. What this means is that the U.S. economy is just barely hanging on by its fingernails from falling into a recession. As Zero Hedge has pointed out, the “average annual growth rate during the current business cycle remains the weakest of any expansion since at least 1949”. This is not what a recovery looks like.

In addition, Barack Obama remains solidly on track to be the only president in all of U.S. history to never have a single year when the economy grew by at least 3 percent. Every other president in American history, even the really bad ones, had at least one year when U.S. GDP grew by at least 3 percent. But this has not happened under Obama even though he has had two terms in the White House.

The following are the yearly GDP growth numbers under Obama. They come directly from the official website of the World Bank…

The disappointing report could keep the Federal Reserve on hold longer as it considers another interest rate hike. The Fed lifted its key rate in December for the first time in nine years but has held it steady since.

According to the pundits in the mainstream media, this was supposed to be the year when the U.S. economy finally returned to “normal”, but that has not happened at all. In fact, in recent days we have gotten a spate of bad news about the economy. We just learned that the homeownership rate in the United States has hit the lowest level ever, and Gallup’s U.S. economic confidence index has fallen to the lowest level so far this year.

With the election coming up rapidly, this is the kind of news that Hillary Clinton definitely does not need. She needs to be able to sell the American people on the idea that the Obama years have been very good for the U.S. economy. If things take a sharp turn down in the coming months, that may be enough to cost her the election.

So far, Hillary Clinton’s economic agenda has not received that much scrutiny, but the truth is that she hopes to increase taxes in a whole bunch of ways which would be very harmful for the economy. The following comes from an excellent piece by John Kartch and Alexander Hendrie…

Hillary has endorsed several tax increases on middle income Americans, despite her pledge not to raise taxes on any American making less than $250,000. She has said she would be fine with a payroll tax hike on all Americans, she has endorsed a steep soda tax, endorsed a 25% national gun tax, and most recently, her campaign manager John Podesta said she would be open to a carbon tax. It’s no wonder that when asked by ABC’s George Stephanopoulos if her pledge was a “rock-solid” promise, she slipped and said the pledge was merely a “goal.” In other words, she’s going to raise taxes on middle income Americans.

Income Tax Increase – $350 Billion: Clinton has proposed a $350 billion income tax hike in the form of a 28 percent cap on itemized deductions.

Business Tax Increase — $275 Billion: Clinton has called for a tax hike of at least $275 billion through undefined business tax reform, as described in a Clinton campaign document.

“Fairness” Tax Increase — $400 Billion: According to her published plan, Clinton has called for a tax increase of “between $400 and $500 billion” by “restoring basic fairness to our tax code.” These proposals include a “fair share surcharge,” the taxing of carried interest capital gains as ordinary income, and a hike in the Death Tax.

Taxes tend to be a pet peeve of mine, so looking at that list of proposed taxes definitely makes me cringe.

If Donald Trump wants to hit the Democrats really hard on the economy, all he has to do is point out the fact that Barack Obama is going to be the only president in American history to never see 3 percent economic growth for an entire year, and he had two entire terms in which to try to turn things in a positive direction.

Sadly, things are very likely going to be worse for the economy no matter who wins the election. Under Obama, our national debt, our trade deficit, and most of our other long-term economic problems have gotten much, much worse, and so the table is set for a major economic disaster during the next presidential administration.

And if what I have to share about the future of America in my new book is correct, we are definitely moving into a “perfect storm” that will not just be economic in nature. The things that are coming are going to shake this nation to the very core, and I believe that we will soon face the consequences for decades of exceedingly foolish decisions.

So in the end, we may look back and long for the days of 1.2 percent economic growth, because what is on the horizon is going to make that look like a Sunday picnic.