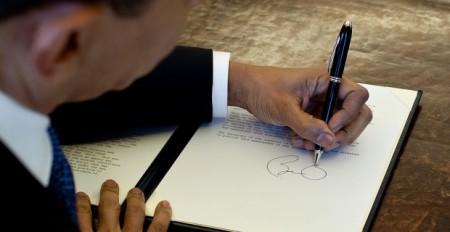 As the Ebola outbreak continues to cause concern, President Barack Obama has signed an amendment to an executive order that would allow him to mandate the apprehension and detention of Americans who merely show signs of “respiratory illness.”

The executive order, titled Revised List of Quarantinable Communicable Diseases, amends executive order 13295, passed by George W. Bush in April 2003, which allows for the, “apprehension, detention, or conditional release of individuals to prevent the introduction, transmission, or spread of suspected communicable diseases.”

The amendment signed by Obama replaces subsection (b) of the original Bush executive order which referred only to SARS. Obama’s amendment allows for the detention of Americans who display, “Severe acute respiratory syndromes, which are diseases that are associated with fever and signs and symptoms of pneumonia or other respiratory illness, are capable of being transmitted from person to person, and that either are causing, or have the potential to cause, a pandemic, or, upon infection, are highly likely to cause mortality or serious morbidity if not properly controlled.”

Although Ebola was listed on the original executive order signed by Bush, Obama’s amendment ensures that Americans who merely show signs of respiratory illness, with the exception of influenza, can be forcibly detained by medical authorities.

Although the quarantining of people suspected of being infected with the Ebola virus seems like a perfectly logical move, the actual preconditions for this to happen aren’t restricted to just those suffering from the disease.